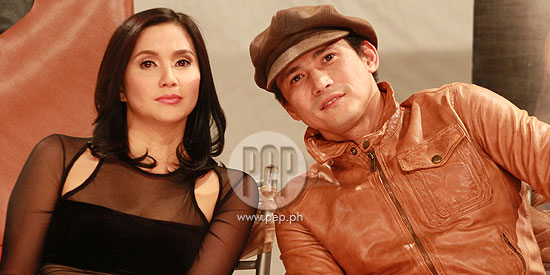 Mariel Rodriguez and Robin Padilla portray a couple in the action flick Sa Ngalan ng Ama, Ina At Mga Anak. This movie is graded B by the Cinema Evaluation Board.

It seems that Robin Padilla, one of the biggest action stars in the 1990s, is bent on bringing back the glory days of the action genre in Philippine cinema.

Action movies were at their peak in the past couple of decades, and at one point, Robin dominated this genre for some time.

Sa Ngalan Ng Ama, Ina, At Mga Anak, which is currently being screened in cinemas, is his attempt to re-introduce the action genre to the present generation.

Prior to this, Robin also appeared in the action flick 10,000 Hours, which bagged majority of awards in the 39th Metro Manila Film Festival.

Sa Ngalan ng Ama… seems to be the actor’s follow-up project in his advocacy to revive action movies.

However, it looks like Robin intended this film to have another shot at the action genre and re-establish his action superstar title.

Sa Ngalan ng Ama… is based on a true-to-life story, which is an effective way of catching viewers’ interest.

It tells the story of Ongkoy (played by Robin), the patriarchal and responsible leader of Kuratong Baleleng, the infamous anti-vigilante group that gained notoriety in Ozamiz City during the '70s.

Ongkoy is depicted as a righteous family man and is respected by ordinary folk in the region because he looks after their welfare, very much like Robin Hood, the legendary King of Thieves, who stole from the rich to help the poor.

It also depicts the dangerous lives of syndicates in the provinces; their need to protect their territory from other groups, who thirst for more power by subduing other syndicates and controling more territories in the area.

Apparently, the film also intends to show the other side of the Kuratong Baleleng group, which has gained a nasty reputation.

The film also centers on Ongkoy’s older children, raised and taught to look after each other and to stick together in good times and bad times.

The movie does not hide the fact that this project is literally a Padilla movie because the cast members consist mainly of the Padillas.

Robin’s daughter Kylie (Anna) and niece Bela (Damian) are also included in the movie, but their roles are not family members, for a change.

A nice surprise in the film is the special participation of well-known and respected names in showbiz, whose names do not appear in the poster.

They include Christopher de Leon, Dina Bonnevie, and Rommel Padilla, as well as Aljur Abrenica, among others.

The actor assumes a Robin Hood-like character; a seemingly chauvinistic guy who fights for the poor and has unquestionable love for his family.

In his fight scenes and action sequences, Robin's character seems invincible and can deflect bullets from every direction. The way the scenes were shot, it gives the impression that they were made to show and prove that Robin still has what it takes to be an action star.

Mariel takes on a more serious role, which is contrary to her real bubbly personality.

Her role as a mom to many kids, including three fully grown young men, is not that convincing because she looks too young. For an action film, Mariel's character is all glammed up since she seems to glow in her scenes.

Daniel Padilla, who is no doubt the most popular celebrity in the Padilla clan, is apparently one of the movie’s selling factors.

Although he has more scenes compared to the rest, his character is given equal weight as those of his siblings in the movie.

The two girls, Kylie and Bela, have less scenes in the movie, but they were still able to leave a mark, especially Kylie who showed her depth as an actress.

Considering that she has fewer scenes in the film, Kylie still succeeds in delivering a moving performance as a fighter. This girl can act.

This biopic about the controversial Kuratong Baleleng group is interesting because it shows the human side of these people, contrary to portrayals often depicted in the media.

Sa Ngalan Ng Ama, Ina, At Mga Anak, directed by Jon Villarin, shows that Robin still has what it takes to be an action star. The filmmakers deserve credit for offering moviegoers an action movie with substance.