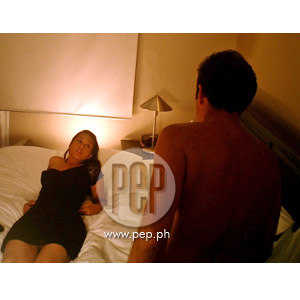 Iza Calzado (in photo) is cast as Mona, a single mother who becomes a high-end escort girl in Singapore. Mona: Singapore Escort will have its premiere night on Monday, November 26, at SM City North EDSA, Quezon City.


An eye-opening indie film about Singapore's infamous escort service will hold its premiere night on Monday, November 26, at SM City North EDSA. The sexy-socio-drama Mona: Singapore Escort stars Iza Calzado as a Filipina who chooses to work in the red-light district of Singapore in order to support her family.


Prostitution is legal in Singapore, where licensed brothels are concentrated in designated red-light areas (DRAs). The escorts carry a yellow health card signifying that they are registered and have recently undergone their bi-weekly health check.

Director Jowee Morel helms this production, which was shot in less than a week in the Lion City. In line with the United Nations' Millennium Development Goals in promoting gender equality and empowering women, this movie aims to make the public aware of the situation of women who work in Singapore's DRAs.

Executive producer Pete Daza tells PEP (Philippine Entertainment Portal), "Prostitution is recognized as a legal profession in Singapore. Based on a study done by the United Nations in 2006, there are around 80,000 domestic workers in Singapore and 10,000 of them are Filipinas who sideline as prostitutes."

"Mona: Singapore Escort is based on the story of an escort who is still there now in Singapore. She now runs her own agency. The scenes that are depicted in the film mostly happened in real life," reveals Pete, who is currently the promotions officer of a support group for the United Nations.

He points out, "The movie aims to show the choices that people make in their lives and that they have to live with those choices. Sometimes it works but sometimes it backfires. They earn lots of money but others get beat up, or they contract sexual diseases."


SYNOPSIS. Produced by Bandit Films Inc. and Outline Digital Films, Mona: Singapore Escort is the story of a poor single mother who takes a job in Singapore, thinking she has been hired as a chambermaid.

Mona (Iza Calzado) is in dire need of money because her father gets sick. She learns about the red-light district of Singapore through the help of her best friend Gab (Liza Diño), another Filipina who recruited her to work in the Lion City.

Continue reading below ↓
Mona discovers that she has been employed in a stable of prostitutes. She is initially repelled by the prospect of selling her body, but her financial needs are great. Thrust into a world behind closed doors, she must entertain clients with different sexual tastes, orientations, and deviations.

One of her clients, a handsome young artist, charms her with his gentle generous nature, and she is irresistibly drawn to him. She pays a price for her blind infatuation when his true nature comes to light. Shot on location in the Republic of Singapore, Mona: Singapore Escort is a story of struggle, despair, sacrifice, and hope.

ONLINE PROMO. To win free tickets to the premiere of Mona on Monday, November 26, leave a comment answering our question below.

Iza Calzado as well as her co-stars Liza Diño and Jake Macapagal will have a theater tour of selected SM Malls on opening day, so watch out!

The first 8 Manila-based PEPsters who can answer our question will win two tickets to the premiere of Mona: Singapore Escort on Monday, November 26. This indie film will be screened at Cinema 4 of The Block, SM City North Edsa, at 7:00 p.m.

Answer the question below by leaving a comment in this article.

What is the name of the character played by Iza Calzado in the indie film produced by Bandit Films Inc., and Outline Digital Films?

Winners will be notified when they can pick up their tickets at the Summitmedia office in Robinsons Galleria.