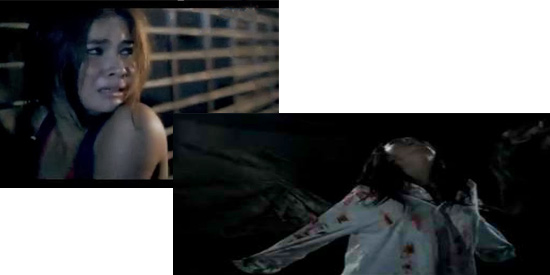 GMA Films’s Valentine offering the horror flick Basement seems like a thrilling watch based on the creepy premise that its trailer offers.

The story: a group of random mallgoers get stuck in an old shopping center basement parking lot where a winged cannibal lurks.

But the film fails to give life to a potentially exciting scare.

Topel Lee’s work in the end leaves the audience shaking their heads.

The movie's attempt for a modern take on the mythical “manananggal ” the beguiling half-human half-bloodsucking monster of the Filipino folklore gets lost in the muddled screenplay peppered with ridiculous scenes.

Halfway through the movie the audience is baffled by all those chasing and gruesome attacks.

One wonders how does the monster even get there? Where does it come from? Has it always inhabited the basement?

THE CHARACTERS. The film kicks off with the introduction of the characters before the frightening events at the basement:

A senior citizen (Pilita Corrales) accompanied by her gay nurse.

A pregnant woman (Chynna Ortaleza) who just found out about her cheating husband and her two kids (Mona Louise Rey and Carl Acosta).

The quarrelling lovers who are apparently having an affair (Enzo Pineda and Sarah Lahbati).

One fails to empathize with the characters because their individual drama comes off shallow and contrived as the plot unfolds.

And there is no sympathy for the characters as they haplessly and unwisely try to find their way out.

Maybe the trapped mallgoers are all in a state of shock and panic so let’s just give them that.

THE SETTING. There's problem too with the setting of the film—the basement parking lot.

It is established that the basement is huge but it's just one level.

So why do the characters have trouble finding each other in one flat plane?

Oh there is a black-out. But the film shows evidence that the emergency lights are on.

Still the Basement inconsistently shows the characters in isolated nooks and crannies attending to their personal matters in the dark.

The film does explain why the characters are trapped in the basement.

The security guard an accomplice in a drug transaction has shut down the basement exit earlier than the shopping center’s closing hours.

But that interesting detail is forgotten as the film drags on to its frustrating end.

It gets to a point that it becomes a guessing game—which of the characters will the manananggal take down next.

I counted four downright ridiculous scenes in Basement but I will mention only two.

First is Louise’s sudden epiphany (yes, amid the terror).

Next is Mona Louise Rey's two attempts to leave her hiding place knowing that the manananggal is right outside.

What terrified child would dare chance an encounter with a blood-sucking creature?

It’s a bit irksome that none of these ill-fated characters has come up with a plan to escape even if it fails and none of them sees the light of day.

In which case Basement would have been a more effective and disturbing horror flick if all the characters have died in the end.