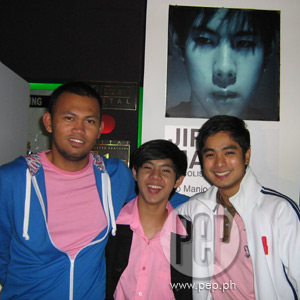 Tambolista director Adolfo Alix Jr. (left) is joined by his stars Jiro Manio (middle) and Coco Martin (right) during the preview night of Cinema One Originals in Glorietta 4 last November 26.

For three days, the digital film fest organized by ABS-CBN's subsidiary, Creative Programs Inc. (CPI), will take place in two separate venues. The finalists of the 2007 Cinema One Originals Digital Film Fest (as well as previous entries) will be screened at the Trinoma Mall, Quezon City, and at the Glorietta 4, Makati City, from November 30 to December 2, 2007.

The suspense-horror Altar; the tale about poverty Tambolista; the political thriller Confessional; the unusual romantic comedy Maling Akala; and the OFW (Overseas Filipino Workers) melodrama Prinsesa will be competing for the top prizes, which amount to a total of P400,000.

During the Cinema One Originals preview night that took place last night, November 26, at the Glorietta 4, the directors of the five shortlisted movies presented ten-minute clips of their entries.

Cinema One Originals project head Ronald Arguelles told PEP (Philippine Entertainment Portal) that the five finalists this year met his expectations."I am satisfied with the technical execution and technical excellence of the quality of the movies," he pointed out. "The global Pinoy is reflected on how we do our movies here not necessarily our content of the movie. How Filipinos give content to audiences around the world. That was our intention when we chose the theme ‘Ang Kuwento ng Pinoy sa Buong Mundo.'"

The Best Picture (Jury selection) of the 2007 Cinema One Originals will receive P200,000; the Star Cinema Special Prize awardee will receive a plaque, plus P100,000; while the Audience Choice Award will get P100,000.

There are other awards to be given out such as Best Actor, Best Actress, and Best Director but there are no cash prizes involved, said Arguelles.

The schedule for the 2007 Cinema One Originals Digital Movie Festival is as follows:


12:05 pm HULING BALYAN NG BUHI (The Woven Stories of The Other)

2:30 pm HULING BALYAN NG BUHI (The Woven Stories of The Other)

SYNOPSES OF 2007 CINEMA ONE FINALISTS:

Anton (Zanjoe Marudo), a boxer who accidentally killed an opponent in the ring, returns to the Philippines from the United States and finds himself jobless and destitute. He is hired by a mysterious foreman named Erning, who assigns him and a man named Lope (Nor Domingo) to renovate an eerie, decrepit house on the outskirts of the city. They soon discover that the place is haunted by the apparition of a young girl, and that the basement carries a strange wooden altar to an unknown deity. Bloodcurdling events follow one after the other, snowballing into a deeply disturbing and violent climax.

Ryan Pastor knows this by heart. As a small-time filmmaker, he knows how sound and images can be manipulated to say anything. And he's tired of the lies—the lies at work, in his relationships, the lies one must keep in society just to exist. On a whim, he decides to go to Cebu to document the Sinulog festival. There he stumbles upon a truth he didn't ask for and is reluctant to touch. One of his subjects, a former politician who may or may not be dying, decides to confess his sins—all the crimes he committed while in office—before Ryan's camera.

What follows is a story of revelations and bitter truths, of buried secrets and sweet lies. Confessional takes you to the heart of a criminal... or an honest man.

The bittersweet love story of JP (Victor Basa) and Teta (Jodi Sta. Maria) gives us a glimpse of how a gay man-straight woman relationship works... or doesn't. JP is a fugitive on the run, after having accidentally killed his lover. On the bus, he sits next to Teta, who is nine months pregnant. When Teta gives birth, JP accompanies mother and child home to their fishpond in Sasmuan, Pampanga. Teta impulsively introduces JP as the father of her child, surprising both JP and her parents. When JP and Teta agree to play-act husband and wife, their queer, dysfunctional tale begins.

How does a child cope with being parentless? Princess' mother dies in giving birth to her twin. Her father, Mar (Romnick Sarmenta), gets a job overseas. Her aunt, Marie (Shamaine Buencamino), cannot fill the void left by her parents.

Prinsesa is the first Filipino film to delve into the psychology of obesity. Fat people have always been portrayed as objects of ridicule in Filipino movies, but what of the circumstances surrounding the issue? Prinsesa regards obesity in a new light, connecting it to the Pinoy diaspora, the separation of parents from their children, and the mechanisms of overcompensation. How can you be a good parent when you're thousands of miles away from your children? What's it like to grow up as children of overseas Filipino workers?

Jason (Jiro Manio), 14, has one passion: playing the drums. His dream is to get a drum set of his own. But life is never as constant and regular as the beat of a drum; it often skips a beat or moves too fast. Jason's brother Billy (Coco Martin) discovers that his girlfriend is pregnant, and he needs to raise the money for an abortion. Their friend Pablo (Sid Lucero) finds himself homeless, jobless, and burdened with a secret. When Jason tries to help Billy, he gets caught up in a web of betrayal and violence. He may finally be able to get his drum set, but is it worth it?