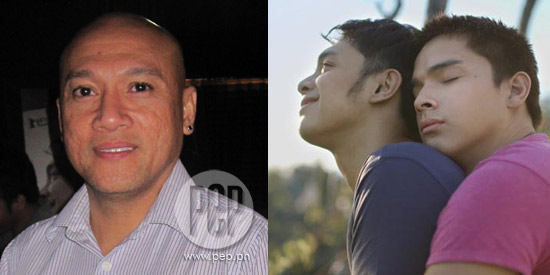 Jay Altarejos (left) directs the movie Unfriend, which aims to be an eyeopener about the pervasiveness of social media and the way we deal with mental health problems. Starring Sandino Martin and Angelo Ilagan, Unfriend opens in Philippine cinemas by February 26, 2014.

Produced by Solar Entertainment and Brillante Mendoza's Centerstage Productions, Unfriend was exhibited at the Panorama section of the 64th edition of the Berlinale.

Unfriend is loosely based on true events that took place in 2011.

Triggered by jealousy, a 13-year-old boy killed his boyfriend before shooting himself inside a mall. Bystanders were able to video the incident and it went viral on Facebook.

However, the film offers a twist to the tragic tale of the teenage lovers.

Sandino Martin is cast as the gay teenager David while Angelo Ilagan plays his lover Jonathan.

Boots Anson-Roa is cast as the grandmother of David while Shamaine Buencamino plays his mother.

Starting February 26, moviegoers have the option to watch the R-18 version (director's cut) of Unfriend or the R-16 version.

WORLD PREMIERE IN BERLIN. Direk Jay says he felt overwhelmed when he attend the Berlinale in Germany, which is considered a top-tier film festival.

"It was so exhilarating! Ang laki niyang bagay, it's a big deal for me...the reception, the articles that came out.

"Ang laking boost sa akin kasi I stopped working for a while. I stopped for a while and sabi nga nila, 'what a comeback.'"

He recalls that viewers in the Berlinale were very interested to discuss the film with him.

"They stayed for the question and answer, around 85 to 90 percent stayed after the screening, mga alas dose na ng gabi."

When asked what is the best compliment that he heard about Unfriend, Direk Jay recalls, "May isa nagsabi hindi siya makatulog. [Alexandra Hudson of Reuters] said it was such a very compelling and strong film."

He adds, "Someone described the film as a journey towards the abyss. I hope na-translate ko ang pakiramdam ng taong dumadaan dun."

INSPIRED BY TRUE EVENTS. Direk Jay got the idea to make this film about the power of Internet and social media when he learned about the tragic story of two gay teenagers who died in Pampanga.

"In 2011, I was taping for GMA and I heard the news about the shooting in Pampanga. It was so shocking to hear about a 13-year-old and a 16-year-old boy.

"Yung circumstances pa na he was able to find a gun and he bought a gun for P3,500 pesos. He was able to sneak it inside a mall.

"Noong una, ang tingin ng tao selos-selos lang. We researched and we tried to talk to the families but ayaw na nilang makapagusap.

REMOVING THE STIGMA. While making the film, Direk Jay discussed the project with a psychiatrist who served as their consultant.

"Maganda siyang tingnan kung ano ang state of mind ng kabataan ngayon and what drives them to such a state of mind? The film might not supply the answers to those questions but hopefully, we could spark conversations about mental health and social media."

He hopes that his film Unfriend will trigger further discussions and eventually remove the stigma associated with mental health problems.

He believes, "When you are in that state of mind, especially if you are suffering from certain mental conditions such as depression, nawawalan ka ng sense of reason.

"Base sa research ko at sa pakikipag-usap ko sa mga doctor, and based on my personal experience, yun ang unang natatanggal sa 'yo.

He stresses that Filipinos should become more aware about mental illnesses and seeking ways to cure it.

"If one suffers from prolonged loneliness...hindi dapat lalagpas ng tatlong buwan. Kung lumagpas dun, that's depression already. And depression is treatable just like any other condition. We should seek professional help.

Through his movie, Direk Jay hopes it will serve as an eyeopener for parents to closely observe their children who are exhibiting symptoms of depression or other mental illnesses.

"Your mind and your body is equal parts of your well-being."

POWER OF SOCIAL MEDIA. The pervasiveness of social media has also made people voyeurs and exhibitionists, according to Direk Jay.

"Lagi tayong nagpo-post but at the same time, we edit what we post, depending on our mood.

"Somehow, we want to give a different side of us. Iniisip natin kung anong post ba ang magkakaroon ng maraming likes.

"It's a show. Our life has become a performance.

The director also laments the fact that even though the Internet has made the world a smaller place, it has also drastically changed the way people interact with each other.

GENDER ISSUES. Aside from tackling the power of the Internet, Direk Jay also wishes to delve into the issues being faced by the LGBT (lesbian, gay, bisexual, and transgender) community.

"Sinasabi nila, we should have better stories, better narratives for the LGBT community. I'm all for that but it happened and it is still happening.


Unfriend will be screned in Philippine cinemas starting this Wednesday, February 26.

CINEMALAYA ENTRY KASAL. Direk Jay is now gearing up for his next indie film. This is the 2014 Cinemalaya entry Kasal, which he described as a movie "with a mature take on relationships."

He reveals, "It's about a gay couple, a filmmaker and a lawyer who have different views on marriage.

"This couple attends a heterosexual wedding in the province and being in a conservative family, papasok sila sa simbahan and mag-i-spark ito ng away sa kanila that will almost destroy the relationship.

"Kasal shows how a gay couple navigates through different spaces in Philippine society—from their own house to their work spaces to their families to the Church."

He is eyeing Baron Geisler to portray the gay lawyer in Kasal.