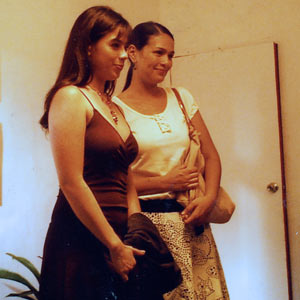 Mona (portrayed by Iza Calzado, right) is shocked to learn that Catherine (Liza Diño, left) has tricked her into working as an escort and not as a chambermaid. Bandit Films's indie movie Mona: Singapore Escort is being screened in SM Cinemas starting today, November 30.

In line with the United Nations' Millennium Development Goals in promoting gender equality and empowering women, Bandit Films has produced the indie film Mona that sheds light on the escort service in Singapore.

Actress Iza Calzado is Mona Morales, a young single mother with a sick daughter and ailing father living in an urban poor community. Mona works as a beauty parlor assistant who shampoos the hair of clients. This is where she meets Catherine (Liza Diño) by chance. Catherine entices her to work in Singapore as a chambermaid. Mona mulls over the possibility of earning a bigger pay and freeing her family from poverty.

She decides to go with Catherine only to discover that she had been fooled into joining an escort service agency. Mona is angry at Catherine but her friend explains that she only took pity on Mona and her family's plight. Although repelled by the idea of selling her body, Mona decides to go through with it.

Mona meets other Pinays working in the escort agency, who become her roommates and friends. They share tales of the different people they meet in their line of work. They entertain clients who have different sexual tastes and even perversions.

Mona is nervous about her first client. Afterwards, she just laughs it off with Catherine, saying "Hindi na ako virgin." Thus begins Mona's journey of selling her body for the sake of her father and her daughter.

Mona is transformed from an awkward girl meeting her first client to a temptress entertaining the sexual fantasies of her geeky customers. But she consistently speaks in broken English, "I'm not model..."


The film documents the lifestyle and working conditions of Filipina escorts in Singapore. It is well known that the escorts have to register and get a yellow card, signifying that they are part of the so-called oldest profession in the world. Iza Calzado even met the Filipina escort whose life story became the basis of the indie film.

Extreme close-ups bring out the beauty of the movie's lead actress. The GMA-7 star was able to step into the shoes of a Filipina escort who feels very lonely and vulnerable in a foreign country. Overall, Iza Calzado's first independent work challenged her to portray a character with deep emotions and a dark past.

The cinematography of the film is a bit rough, admittedly because it was shot guerilla style. Directed by Jowee Morel, this movie depicts the wide gap between two Southeast Asian countries—cosmopolitan Singapore and the depressed urban areas of the Philippines.

The film version shown during the November 26 premiere night was coarse because of the transfer from digital to 35mm reel. The organizers extended their profuse apologies before the film showing because even the end credits were not yet included in the reel. Voice dubbing was not yet synchronized. We hope that these technical problems are fixed before they send Mona: Singapore Escort to film festivals in an effort to showcase the plight of Filipino women.