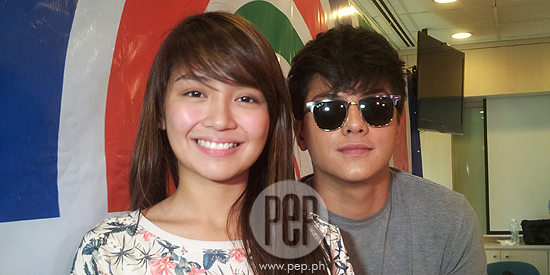 After being seen in the primetime hit Got To Believe, the kilig tandem of Daniel Padilla and Kathryn Bernardo is now working on Star Cinema’s She’s Dating The Gangster.

It tells the story of Athena (Bernardo), a high school student who’s forced to pretend to be Kenji’s (Padilla) girlfriend in order to make his ex feel jealous.

Based on Summit Media’s novel of the same title, this movie is helmed by Cathy Garcia-Molina.


Kathryn revealed that she became even more excited for her new role after she read the book.

The story seemed to be tailor-fitted for the popular teen love team, especially with Daniel who can identify with his character’s bad boy image.

After the success of the now-defunct teleserye Got To Believe, people might expect the two to come up with a box office hit.

Kathryn and Daniel, for their part, maintained that they’ll just do their part in terms of portraying their characters the best way they could.

Daniel feels fortunate that director Cathy Garcia-Molina will be at the helm of the project.

Daniel and Kathryn are scheduled to start shooting She’s Dating The Gangster on Friday, April 4.

The target playdate will be during the third quarter of 2014.