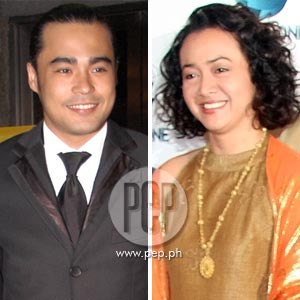 Sid Lucero (left) and Shamaine Buencamino (right) were named Best Actor and Best Actress, respectively, during the awards night of the 2007 Cinema One Originals. The ceremony was held last December 1 at the Renaissance Hotel in Makati.


A dark comedy produced mostly by five people upset four other films by bagging seven of 14 trophies given out during the 2007 Cinema One Originals awards night. The third edition of this annual digital film festival took place last Saturday, December 1, at the Grand Ballroom of the Renaissance Hotel in Makati.


Confessional, the first feature film of Ruel Dahis Antipuesto and Jerrold Tarog, brought home the Best Picture Award despite having a short-staffed production crew. For their efforts, the team receives a cash prize of P200,000 from Cinema One.

"It's really a surprise," said Jerrold during his acceptance speech. "On most shooting days lima lang kaming crew, dalawa pa dun cast. It's a testament to the independent spirit."

This mockumentary set in Cebu during the Sinulog festival showcases the confessions of a former politician revealing the sins he committed while he was still a public official. Confessional received the Star Cinema special award plus the P100,000 cash prize while Ruel and Jerrold shared the Best Director Award.

Jerrold gained even more accolades as the night progressed. The musical director of award-winning indie movies such as Kubrador, Kadin, and Masahista even added color and confusion to the awarding ceremonies by using anagrams. An anagram is defined by the Merriam-Webster dictionary as "a word or phrase made by transposing the letters of another word or phrase."

Roger "TJ" Ladro, who won Best Sound Design, was actually an anagram of Jerrold's name. Best Editor Pats R. Ranyo was also merely a rearranged spelling of Ryan Pastor, the character he played in Confessional. Jerrold was nominated as Best Actor for his performance as the filmmaker Ryan Pastor. He even claims that his other alias, Ramon Ukit, the recipient of Best Screenplay,"was a crude Filipinization of [his favorite fictionist] Raymond Carver."

For playing the former politician Lito Caliso in Confessional, Publio Briones III was named the Best Supporting Actor that night.

The Audience Choice award went to Lawrence Fajardo's Prinsesa, which won a cash prize of P100,000.

The program started with a performance led by Ogie Alcasid. Also, Christian Baustista and Rachelle Ann Go presented a romantic Christmas medley with songs such as "Sana Ngayong Pasko."

The five finalists in the 2007 Cinema One Originals Digital Film Festival were Confessional, Prinsesa, Tambolista, Maling Akala (directed by Pablo Biglang-Awa and Veronica Velasco), and Altar (directed by Rico Ilarde). The films were produced by Creative Programs Inc., one of the subsidiaries of ABS-CBN.