Behind the scenes of "Batanes" 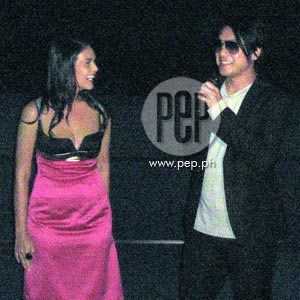 Breaking through language and cultural barriers, the characters of Iza Calzado and Ken Zhu in the movie Batanes develop a relationship they consummate in sexual love. Above, the two stars address their fans during the December 4 premiere night at the Trinoma in Quezon City.

Imagine powerful waves crashing into a steep hillside, lush hills that stretch as far as the eye can see, and traditional stone-and-cogon Ivatan houses—all these and more are just some of the images that are wonderfully captured by the tandem of directors Adolfo Alix Jr. and Dave Hukom. For their full-length feature film Batanes, they tapped the beauteous Iza Calzado to play the leading lady of Ken Zhu, a member of the popular boy-band F4.

Ken played the role of Xi-Men in the hit television series Meteor Garden and its sequel Meteor Rain. He stayed in the Philippines from December 1-5 to promote his movie and meet his admirers during the fans day held at the Trinoma last Monday.

Batanes is told from the perspective of Pam (Iza Calzado), a Filipina who has a love-hate relationship with the ocean. She meets an Ivatan, a local of Batanes, named Rico (Joem Bascon) and decides to settle in the northernmost province of the Philippines. They get married but their love story comes to an end when Rico gets lost at sea.

Pam is distraught and becomes resentful of the ocean. She is still grieving for her loss when she meets Kao (played by Ken), a Taiwanese who is mistaken to be an illegal fisherman. He is washed up onshore where Pam finds him injured and running a fever. Kao is the second man in Pam's life but he has secrets of his own.

The cast and crew of Batanes shot this film for 19 days on the islands of Sabtang and Basco. The staff brought their own generator to Batanes so they could shoot scenes even when electricity was switched off from 12 midnight to 12 noon the following day.

PREMIERE NIGHT. PEP (Philippine Entertainment Portal) was present when the stars of the film attended the premiere night last December 4 at the Trinoma, Quezon City.

Iza addressed the crowd first: "Magandang gabi po sa inyong lahat. I would like to thank everyone for all the support. Sa lahat po ng nagtiyagang pumila sa labas, maraming salamat po. We greatly appreciate the presence of all our guests. We would like to thank Ignite Media and GMA Films for doing this film....our directors Adolf Alix Jr. and Dave Hukom. And to Ramoncito Redoble for being an excellent cinematographer. To Ken, thank you so much for doing this film. We really hope you will enjoy this film."

After Iza's lengthy acknowledgment, Ken Zhu gave his own thanks. "I think Iza has said it all. Anyway, thank you all for coming tonight. I do hope you do enjoy you the movie. Everyone who participated in this movie put their best effort in it."


Director Adolf told PEP how they managed to get such a good view of Batanes. "Gumamit kami ng 8-seater plane so we were able to get aerial shots. Nagdala rin kami ng stage man na may wind blower at may lightning effects." They also asked the help of the firemen of Batanes to provide the rain effects of the film.

He also explained that they wanted to capture the rugged seascape and dramatic view of mountainsides, which is why they decided to shoot the film using Cinemascope, a widescreen movie format.

Batanes is rated "B" by the Cinema Evaluation Board. It is now showing in cinemas nationwide.