Antoinette Taus decides to stay in the Philippines for good; wants to work with ex-boyfriend Dingdong Dantes 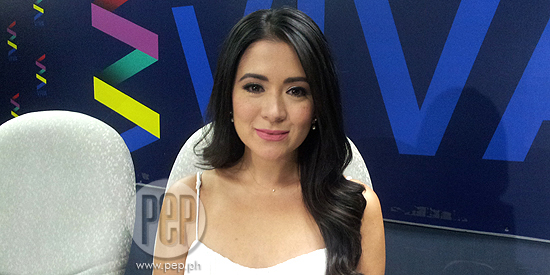 Antoinette Taus on signing a three-year management contract with Viva Entertainment: "Ever since naman Viva baby talaga ako. Lahat ng projects ko, including my album, all my movies and TV shows were all because of Boss Vic del Rosario and Viva." When asked to name the actors she would pick as her leading men, Antoinette chose Dingdong Dantes, Sam Milby, and Xian Lim.

“It just felt right,” were the words that Antoinette Taus uttered when asked what made her decide to stay in the Philippines for good.

Antoinette was just supposed to have an extended vacation when she was offered to make a showbiz comeback after a 10-year-hiatus.

“Parang you get this feeling na, ‘Okay, binibigyan na kita ng sign na dapat dito ka muna. So take it, I’m guiding you towards this. If this is what will make you happy…’

CERTIFIED VIVA BABY. On Tuesday afternoon, May 13, Antoinette officially inked a 3-year management contract with Viva Entertainment, which produced all her movies in the past.

“Boss Vic and Ate Veroniuqe asked me, ‘Are you going to stay here for good?’ Sabi ko, ‘Actually, that’s what I’ve decided, which is why nangyari na nga ito and I’m back with Viva.

“I’m happy to be reunited kasi grabe wala akong masabi. When I was here before, Viva took care of me and gave me the best projects, so, exciting.”

Without giving specifics, the 32-year-old singer-actress said that she’s slated to do movies, TV shows, a recording album, and theater acting stints.

Acting-wise, Antoinette is raring to pursue bolder roles, far from her teenybopper days in showbiz.

It will be recalled that she used to be paired up with her ex-boyfriend Dingdong Dantes in '90s romantic films, the most popular of which was Honey, My Love, So Sweet (1999).

“And the real me, I’m really bubbly. I don’t wanna say aggressive, but I’m really outgoing and very straightforward.

Aside from Dingdong, Antoinette is excited to work with other leading men such as Sam Milby and Xian Lim.

As for her singing career, Antoinette said that she’s actually planning to co-produce her own album.

“Matagal na akong hindi narinig kumanta sa Philippines. My voice has changed a lot due to my training and experience in the States. Nag-iba yung style ko.

“Plus I write my own music now. Excited ako na mag-co-produce ng album and write pretty much all of my songs with a new sound,” she said with a smile.


During her stay in the United States, Antoinette became part of the vocal group Kinfolk that competed in the third season of the NBC show The Sing-Off.