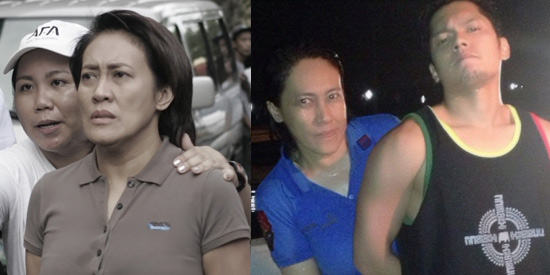 Ai-Ai delas Alas' character in Ronda is forced to make a difficult decision when she realizes her teenage son (Julian Trono) has killed his lover. In her Instagram account, Ai-Ai shared a photo where she appears drenched and provided this caption: "this is ART..this is ART???...basa kami ng 3:12 to be exact.....ginawwwwwwwwww!!!( d halata dba na maginaw pero ... wtf...art)"

One of the films competing in the 2014 Cinemalaya Film Festival is Ronda, which tells the story of a woman faced with a moral dilemma when her duties as a mother and as a policewoman collide.

Ronda tells the story of Paloma (Ai-Ai delas Alas), a policewoman who patrols the streets of Manila at night. Searching for her son who has been missing for days, Paloma examines herself and her failings as a mother. She is forced to make a difficult decision when she realizes her teenage son (Julian Trono) has killed his lover.


The script was actually written two years ago. Co-writer and line producer Adolfo Alix Jr. was directing the film Chassis when he noticed the policewomen who were guarding the cast and crew. He became curious about the policewomen and the work they do. He joined them while they were doing their rounds, and that’s how he came up with the story.

Director Nick Olanka liked the material and decided to enter it for the 10th edition of Cinemalaya. The story takes place in real time, but Direk Nick plans to direct it in a style that is not real time. Direk Nick liked the challenge. He said, “Hindi naman ako babalik sa indie after 6 or 8 years kung walang magchachange sa akin or hindi ako machachallenge…kaya ako na-attract sa kwento.”

This is Direk Nick’s first time to work with Ai-Ai, but he found it really easy to work with her. He also counts on Ai-Ai’s experiences as a mother to guide them through the intricate emotions a mother might undergo given the circumstances of the story.

Ai-Ai is a co-producer of Ronda. She has also produced some of her previous films with Star Cinema.

The comedienne said that if this movie becomes successful, she plans to do more indie films in the future. She might even produce an indie film even if she is not the star of the movie.

Ronda and other Cinemalaya films will be screened from August 1 to 10, 2014 at the Cultural Center of the Philippines, Greenbelt 3, Trinoma, Alabang Town Center, and Fairview Terraces.