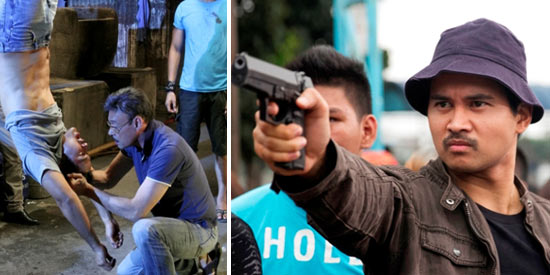 Watch the cinemas for a new kind of Pinoy action film. Ang Bagong Dugo is billed as an action-packed crime drama with Joem Bascon as the lead.

The film predominately takes place in the Santa Cruz City Jail where Joem Bascon's character, Anong, is incarcerated. He gets involved with the inner prison politics between the wardens, the head honcho of the prisoners plus other crime bosses. It sets the stage for what would be an elaborate revenge plan that ties to his past.

Being mostly situated in one location lessens the amount of action scenes Ang Bagong Dugo could utilize, especially in a prison. It still has the prerequisite exploding cars, gun fights, and even a motorcyle chase plus a tractor but the controversial scenes are probably what would be most remembered.

Controversial, attention-grabbing scenes include the gang rape of Anong and the full frontal nude protest mounted by the inmates. The love scene between Joem and his leading lady Alexis Navarro and the twist ending would be of note as well.

Joem Bascon is "very happy..." that he is a "true" action star. He considers Rudy Fernandez and the original bad boy Ace Vergel as some of his inspirations for his role as Anong. He showed off his martial arts training for his fight scene with Ian Ignacio.

What differentiates Joem from typical action stars would be his willingness to show emotions, far from portraying a stoic and macho persona often associated with characters in this genre. As he himself points out: "Ito ang first time na nakakita ng tumulo ang luha ng action star."

Something to note would be Joem's lack of expression during the actual rape. The experience would be horrific to anybody--male or female--but Anong almost kept a blank expression all throughout. Even through the mouth kissing and fondling, Anong was quiet, almost out of the situation. He wasn't screaming or even shouting for help. This could possibly attributed to Anong’s traumatic backstory. His childhood tragedy gave him focus to block out all emotion except his anger and thirst for revenge, which he himself has to keep concealed from related parties. This would actually be an interesting take, lending weight to his romance with the nurse (played by Alexis) being the only thing that would make him normal or humanize him from his route of vengeance.

Action-wise, the film could either have been more realistic or made over the top like the classic Pinoy action films. The gun play is grounded enough but, to be honest, the martial arts scene came out of nowhere and was only of use in that one scene, then played into a comedy later. The street action scenes were used up in the beginning and mostly everything else was in the prison, limiting the freedom for huge mayhem. The infiltration in the ending could have been helped with having more guards to make for a typical “impenetrable” fortress that the heroes would break into but it just wasn't in the script.

The story theme is a standard of the ‘70s or ‘80s. The flashbacks add a little innovation but the actual twist could be deciphered early on. It's the ending that actually would catch people off guard, the surprise is actually quite welcome, or not, depending on your take on it.

What really could be taken as breaking new ground of sorts is showing the culture in our local prisons. The conditions the prisoners are in, being crammed in cells but actually being pretty open. The wardens let the inmates do what they please with their power plays and intrigues. Some can actually leave the prison while women are actually brought inside for “parties?” Being by a body of water would actually make it easy to escape even without the corruption. The rules being pretty relaxed (to the point that the inmates could change the rules through a nude protest) is a puzzle for those who actually don't know how our own prisons are maintained. Are they following the perceived notion of how prisoners in foreign penitentiaries behave or was it true research on how the Santa Cruz City Jail is really run? If it's the latter, bravo on the producers for being true to life though that puts to question faith in on our own incarceration system.

Ang Bagong Dugo is rated R-16 and is currently being screened in cinemas starting today, June 18, 2014.