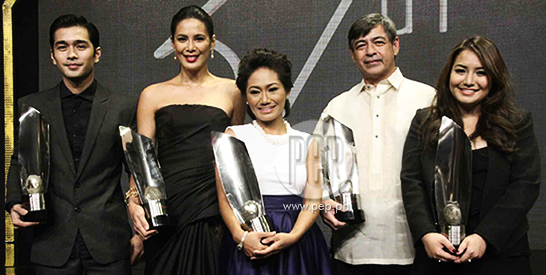 The 37th Gawad Urian once again celebrated the excellence of the Philippine cinema last June 17 at the Dolphy Theater.

After a series of umm and ahm’s, Angeli was about to cry when she said, “I would like to share this honor with everyone who was nominated. It is an honor to be nominated along side such honorable actresses, such brilliant actresses, I feel like this is not happening right now.”

Best Actor – Joel Torre for On The Job (OTJ.) Veteran actor Joel Torre says that he is “very very humbled” for winning an award.

“For 30 years she stood up with my mistress, which is my career. But until now she’s still here... I love you very much. Para sa 'yo to. Alam ko you like diamonds but this more beautiful and more precious,” he romantically concludes.

Best Direction – Hannah Espia for Transit. A shocked Hannah Espia accepted her award for the movie Transit, which tackles the lives of Filipinos residing in Israel. The young director said, “Thank you God. Thank you Lord for giving me the oppurtunity to direct my first film. Salamat sa mga Manunuri for recognizing my efforts.

Direk Hannah is said to be the third female director to win the coveted award.

“This is my very first Urian award. I'm very overwhelmed because I get too many nominations this year from the Urian, it feels surreal that I was competing against myself. So thank you very much.”

“Nay, I love you, sana alam mo 'yan. And mga anak ko. Thank you for walking this life with me and never giving up on me, and picking me up every time mommy falls.”

Best Supporting Actor – Junjun Quintana for A Philippino Story. Junjun is no longer a newbie in the industry, being an actor for four years. The actor finally reaped the harvest from his hard work.

Here is the list of winners in the 37th Gawad Urian: