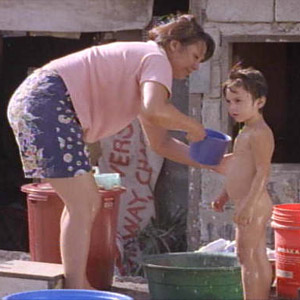 In Foster Child, Thelma (Cherry Pie Picache) gives John-John (Kier Segundo) a bath for the last time before she gives him up to the American couple that adopted him. Dante Mendoza's moving tale about surrogate mothers recently won the Prize for Fiction in Paris, France.


Cherry Pie Picache's portrayal of a foster mother has caught the attention of international film critics once again. Brillante "Dante" Mendoza's documentary-style movie Foster Child has won in the Prix de la Fiction at the Festival International du Film d'Environnement 2007 in Paris, France. The said film fest was held from November 21 to 27.

PEP (Philippine Entertainment Portal) received a text message from director Dante Mendoza that goes: "Just got back from Belfort IFF [International Film Festival] in Paris." Dante was attending the Entrevues Film Festival in Belfort, France, when he was informed by Ad Vitam's program manager Emmelie Gree that Foster Child bagged the Prize for Fiction from the International Environmental Film Festival. This Philippine entry bested other films from Australia, Spain, Russia, Iran, and Turkey.


Ad Vitam is the French distributor of Foster Child, which was produced by Filipino production company Seiko Films. Starring Cherry Pie Picache and Eugene Domingo, this indie film is set for theatrical release in France on February 23, 2008. It will be released under its French title, John John.

This is the third international award of Foster Child after the Best Actress Award for Cherry Pie in New Delhi and the Special Jury Award in Eurasia (Kazakhstan).


According to Ferdinand Lapuz of Ignatius Films Canada, Foster Child has also been invited to compete for the Golden Lady Harimaguada award at the Las Palmas International Film Festival in Spain in February next year.

The Durban International Film Festival has also sent the official invitation for Dante's movie to compete next year. Cherry Pie won the Best Actress Award this year in the same festival for another Mendoza film, Kaleldo (Summer Heat).

Foster Child is a narrative of the day when a Filipino family in the slums has to say goodbye to their three-year-old foster child John-John (played by child actor Kier Segundo) because an American couple has come to adopt him.

TIRADOR. Dante's other film Tirador will be screened at the Dubai International Film Festival from December 9 to 16. The director, together with Kristofer King and Coco Martin, will attend the festival. Dubai IFF writes, "From the Philippines comes the raw and energetic low-budget Slingshot from major new talent Brillante Mendoza. From an astonishing, breathless opening sequence, police raid a tenement building in the teeming Manila slum of Quiapo. The story then follows the inter-locking lives of a wide cross-section of the tenement's residents." It is part of the Cinema of Asia film line up of the DIFF, which was established in December 2004.

From Dubai, Dante will proceed to Morocco where Tirador is competing in the Seventh Festival International du Film de Marrakech from December 5 to 17. Tirador will vie for Etoile D'or/Grand Prize, Jury Prize, Best Actor and Actress awards.

Academy Award winner Milos Forman (One Flew Over the Cuckoo's Nest and Amadeus) is the jury president. Other members of the jury include actor John Hurt, director and actor Shekhar Kapur and actress Parker Posey.

Swift Distribution, Tirador's French distributor, is handling the French festivals of the film. The gritty film about Quiapo has also been invited to compete at the Festival Cines del Sur in Granada, Spain next June. It will also be shown in the Forum section of the Berlin International Film Festival in February next year.

The Film Development Council of the Philippines headed by Jacky Atienza and the FDCP Festival Committee chaired by Christine Dayrit and executive director Lali Suzara is supporting the participation of both films in the said international film events.