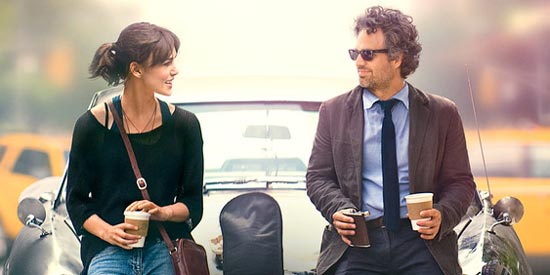 The plot unveils through every song. The lyrics not only express the characters’ feelings but also tell their stories even better than the narration and dig deeper than the spoken dialogue.

The upbeat yet relaxing melodies also keep your head bopping and feet tapping the floor as you listen to the heartfelt sentiments found in every track. The beat is so easy to follow that you might even find yourself humming in the middle of the song.

Despite having almost an hour worth of songs, Begin Again is not entirely a musical. Gretta doesn’t just run around the streets immersed in her own world while singing her thoughts out loud ala Éponine in Les Miserables or suddenly burst out a melody turning conversations into a song like Grease’s “Summer Nights.”

In the movie, Gretta is indeed a street performer, although it took a lot of bargaining from Dan’s part since Gretta believes that she’s “not a performer” and only “writes songs from time to time.” In the end, the stage-shy songwriter was finally convinced to record her songs in different parts of the city and share her compositions to the world.

Gretta and Dan’s talents complement each other. When drunken Dan found the dejected Gretta singing in a bar, inspiration hits him as he imagined the instruments coming to life as he magically blends his instrumental arrangements with Gretta’s song “A Step You Can’t Take Back.”

“A Step You Can’t Take Back” hits two birds with one stone. Dan visualizes his own story through the lyrics, “Here comes the train upon the track / and there goes the pain it cuts to black / Are you ready for the last act / to take a step you can't take back?” On the other hand, Gretta pours her heart out for her ex-lover David Kohl, which is evident when she sings “Did she love you? Did she take you down? Was she on her knees when she kissed your crown?”

Ex-lovers David and Gretta are musically matched. They both sing and write songs that speak about their lives. They also used to believe in the same values, such as “music is for the ears not the eyes,” until David gets his big break that eventually leads to their breakup.

Will Gretta accept him back? Will their love Begin Again?

Directed by John Carney, Begin Again is bit similar to his 2006 Academy Award-winning Once, which depicts the budding romance of an Irish musician and an immigrant single mother.

Begin Again is a feel-good drama set in the streets of New York.

Carney’s witty writing combined with a story about love and heartbreak blended together with natural acting makes Begin Again a heart-warming film that’s easy on the eyes and ears.

Since the film isn’t inclined towards heavy drama, the true-to-life treatment given to the movie shows how you can’t easily fall out of love, and that developing true love takes time. It showcases real people living real lives without much flair and drama. The film simply features life as it is.

Keira Knightley and Mark Ruffalo’s chemistry is sparkling with a lot of possibilities for further development in the film. Keira is also a surprisingly good singer. Her sweet voice—coupled with acoustic guitar strums—is both calming and charming.

Meanwhile, Maroon 5 vocalist Adam Lavigne is not a bad actor himself. Being a real life singer, he is able to naturally give off the cool rockstar vibe. Although, there weren't as many dramatic scenes to fully flaunt his acting skills. But then again, the film gave him the chance to jumpstart his movie acting career and possibly do another role for the big screen.

Begin Again boasts of its beautiful portrayal of New York’s urban lifestyle through landscape shots and its ability to capture the independent music scene of the famed city.

In Begin Again, music is used as therapy and a creative outlet to express words unsaid stemming from complicated emotions.