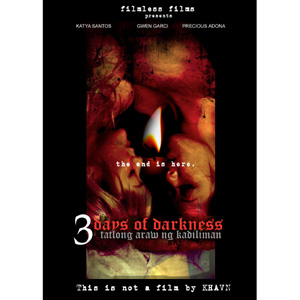 The steamy love scenes between Kimberly (Katya Santos), Michiko (Gwen Garci), and Isabel (Precious Adona) were almost not shown to the public when the MTRCB declared that Three Days of Darkness was unfit for public exhibition. However, a third review of the film has given it a rating of R18.

With Three Days of Darkness, director Khavn De La Cruz attempts not only to redefine the public's current perception of what a local digital feature is, but also to break new grounds and techniques in local filmmaking in general, reinventing a genre and testing its limits.


On the opening day of the film last December 12, theater houses that were supposed to screen the film were unable to show Three Days of Darkness on time because on that same morning, the Movie and Television Review and Classification Board (MTRCB) had changed its rating of R18 (for adults only without cuts) to Rated X (unfit for public exhibition).


Even though it was shown already to select viewers during its premiere last December 4, Khavn De La Cruz's film suffered a setback when it was Rated X by another set of MTRCB reviewers. During the first review of the MTRCB, the producers of the film received a "festival permit" that was "good for fifteen (15) days" only. Filmless Films, the producer of the film, disclosed that Three Days of Darkness initially had a rating of R18 without cuts.

However, when the group applied for its five-year commercial exhibition permit, the film underwent another review. A different set of MTRCB reviewers opted to change its rating to Rated X because of the graphic scenes between Katya Santos, Gwen Garci, and Precious Adona.


On its third and final review, the "lightness" of the story convinced the MTRCB reviewers, including Ms. Jackie Aquino Gavino, Direk Boots Bautista and Mr. Ricardo De Leon, to revert to the original rating of R18 without cuts.

SYNOPSIS. Three desirous women, each harboring a dark secret of their own, are trapped inside a house in chilly Baguio. Their pent-up emotions and passion inevitably surface while they are in a highly volatile situation. What eventually consumes these women is the total darkness that covers not only their abode but probably even the world outside. Could it be finally happening—the end of the world signaled by three days of darkness? What evil lurks in the dark that make playthings out of these hapless women? What horror awaits them?

Three Days of Darkness is being screened until December 24 at Robinsons Galleria, Robinsons Ermita, and Robinsons Bacolod.