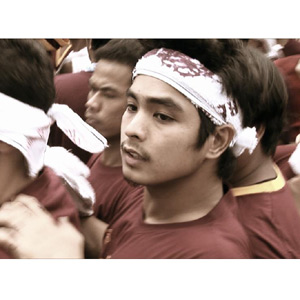 Coco Martin (in photo) stars in Tirador (Slingshot), which won a Special Jury Award in the 7th Marrakech International Film Festival in Morocco. Above, Coco takes part in the annual Black Nazarene procession in Quiapo, Manila.

Direk Dante called me last Saturday around 4 p.m. (Toronto time) and gave me the good news. The award was presented to him by Academy Award winner Milos Forman who was the head of the jury.

Academy award nominee Shekhar Kapur of Elizabeth and Elizabeth: The Golden Age approached Direk Dante after giving his acceptance speech. He was surprised when the Filipino director mentioned that Tirador was shot in 10 days and that the film was shot and projected in digital format.

The other films in competition were:

The Savages by Tamara Jenkins, USA

Tirador French distributor Didier Costet of Swift Distribution was very happy with the award. He took care of Direk Dante during their stay in Marrakech. Swift is handling all French festivals and it is very likely that Tirador will compete in Deauville Asia in France next year. Programmer Jerome Lasarre selected Tirador for Marrakech and he is also in charge of programming in Deauville.

After its world premiere in Toronto, Tirador was screened in Pusan and Dubai. Its first festival next year is in Berlin's Forum section. It will compete next year in Indianapolis (Best Film gets North American distribution deal from Film Movement), Singapore and Granada, Spain (Best Film gets 50,000 Euros).

Direk Dante and I are now preparing for his next film, Serbis, which won a script development funding grant from the Asian Cinema Fund at the Pusan International Film Festival last October.

Centerstage might co-produce it with two international productions. Swift Distribution has already expressed interest to co-produce Mendoza's next feature film.

James Liu of Joint Entertainment in Taiwan is also interested. We already had a preliminary meeting with James during the Thessaloniki International Film Festival in Greece last month.


Serbis is to be written by Boots Agbayani Pastor (Masahista, Kaleldo), with Armando Lao as creative consultant.

Tirador is Mendoza's fifth film to win international recognition. His first feature Masahista won a Golden Leopard in the video section at the 2005 Locarno International Film Festival in Switzerland and Interfaith Award in Brisbane, Australia in 2006.

Manoro (The Teacher) won the CinemAvvenir award in Torino, Italy, in 2006 and also the Best Film and Director awards in the digital local section of Cinemanila.