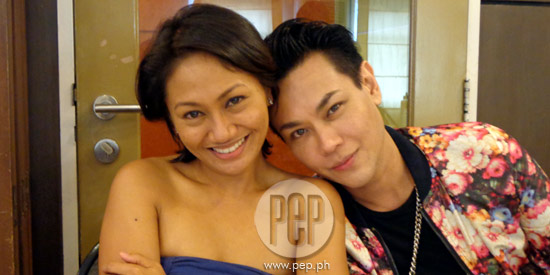 For winning the Best Actress award at the 37th Gawad Urian where she beat out screen legends Nora Aunor and Vilma Santos, Angeli Bayani has achieved an admirable feat.

What is next for Angeli? Soon, she will be appearing in the international movie Foreigners alongside Hollywood actor Garret Dillahunt.

The producers of the film, who saw her standout performance in the Cannes Best Debut Film Ilo Ilo, eventually cast her. According to Angeli, the movie is about foreigners in Manila who have no identity. In the film, the foreigners actually conspire with syndicates.

When asked about her experience working with Garret Dillahunt, Angeli exclaimed, “Oh my God! Alam mo, I hate them kasi I only had one scene with him. Actually two…what struck me about him was that sobrang simple lang niya. Ang simple pero yung nuances…parang ang sarap niyang panoorin.”

She confessed that she was starstruck when she found herself sharing the same vehicle as Garret whose work she admired. She was so flustered that she even ran to the nearest convenience store just to calm her nerves. Then she went back to the vehicle, casually introduced herself, and tried not to hyperventilate.

Last July 31, a press conference was held for the Cinemalaya 2014 New Breed entry Bwaya and the Cinemalaya short film Eyeball (which is part of the set called Shorts B).

Eyeball is directed by Thop Nazareno and stars Nico Antonio, Alchris Galura, Sei Magalona Calibo, and Garret Villanueva. It is a comedy about a pervert who is set to meet a woman he met on Facebook. Instead, he meets someone else who will change his life forever.

The full-length film Bwaya is a true-to-life family drama that revolves around Divina (played by Angeli Bayani), a 35-year-old Manobo who hears shocking news: her daughter has been attacked by a crocodile and her body is missing. As Divina searches for the body of her daughter in the marshlands of Agusan, she learns a lesson more tragic than her fate: not all predators are underwater.

Direk Francis Pasion invited Angeli to audition after seeing her award-winning performance in Norte. He auditioned a lot of talented actresses, but he felt that Angeli captured the character best. Even the real life subject, Divina, agreed. Upon seeing the audition tapes, Divina said, “I see myself in her.”

Eyeball and Bwaya will be screened from August 2 to 10 at the Cultural Center of the Philippines, Greenbelt 3, Trinoma and Alabang Town Center.

According to Direk Francis Pasion, Bwaya is the first film that is shot entirely in the Agusan marshlands. He wanted to show the picturesque landscape and the plight of the people. But it was also incredibly difficult to shoot in that location. They stayed in floating houses and even had floating bathrooms. Aside from that, the river was infested with crocodiles. The cast and crew did not see any crocodiles, but they felt the crocodiles’ presence. Mechanical crocodiles were used for the movie.

In an email interview with Direk Francis, he told PEP.ph (Philippine Entertainment Portal) about the time when their boat malfunctioned at night at a crocodile-infested river.

He narrated, “One of the challenges during our shoot was the boat rides to and from our location. From where we are staying, it would take two hours to get to our location by boat. There is a portion where we have to turn off the motor of the boat so as not to disturb the fish sanctuary. That body of water is also the home of crocodiles the size of buses.

“In one occasion, we were supposed to pack up at 4 pm so we don’t travel in darkness on our way back. But our boat had an engine malfunction. We stayed in pitch dark water for about an hour. It was really eerie. The silence is deafening and we were really afraid of what may come out of the crocodile-infested waters. All the actors were onboard, Karl, Angeli and R.S. Francisco. It was sort of traumatic. When the boat was finally fixed, we were rewarded by a magnificent formation of fireflies on the riverbanks.”

The actors found the location equally challenging. R.S. Francisco said it was very hot. Angeli was scared of the crocodiles at first, but later on she became scared of something more supernatural.

The film is based on true events. The real life subjects, Divina and Rex, were present on the set. Karl Medina watched Rex closely and observed the mannerisms of the father who lost his daughter.


It was harder for R.S. Francisco whose real-life subject had already fled. He talked to the villagers to learn more about the person he was playing. He also based his character on his high school drama teacher who had an ambiguity that was similar to the character.

Angeli talked with Divina and tried to capture as much of the real Divina as possible. But it was difficult for her as well. Angeli said, “Hindi ko talaga alam kung paano gawin. I was left to my imagination and interviews with other people kasi I felt nung kinakausap ko si Divina, too much input from her kaya ko nai-intellectualize yung character niya. So we started talking to the other people around her...doon ako humugot…”

It was a total departure for Angeli to play a character who was hysterical and animalistic, a woman on the edge. But she could also relate to Divina on some level.

ON WORKING WITH NON-ACTORS.

Bwaya is also unique because there were only three professional actors in the cast. The majority of the actors were non-actors. Direk Francis decided to cast townsfolk to get a feeling of authenticity.

He discovered Jolina Espana when he saw her jump off a cliff and into the river. He was impressed by her spunky attitude and eventually cast her.

Angeli was impressed with the non-actors but admitted that at times the young actors felt self-conscious in front of the camera.

ON BEATING NORA AND VILMA.

When asked about how it felt to be known as the actor who beat seasoned actors Vilma Santos and Nora Aunor, Angeli laughed before answering, “It’s insane kasi hindi ko naman kino-consider na natalo ko sila. I think it just happened to be the right project at the right time.

“Hindi ko kayang i-claim, kahit ano pang sabihin ng ibang tao na natalo ko sila…kasi a long time ago na-set na nila yung standard para sa atin. I can only follow in their footsteps. I can only hope to be like them or be one of them so to speak kasi I can’t be like them talaga. Ate Guy is Ate Guy and Ate Vi is Ate Vi…I tried to say this in my acceptance speech…na gusto kong pasalamatan sila na mga nauna sa amin at nagbigay daan.”

ON ALMOST GIVING UP SHOWBIZ.

Angeli’s career is definitely taking off, but she has had her share of highs and lows. She admitted that there were times in the past when she felt like giving up showbiz.

“Several times, I figured I think I would need something more regular…for six months I had worked at a call center.

“I knew it was something I could go back to kasi maganda naman yung record ko. But I asked myself simple questions like: Was I happy at that time? Was I fulfilled? No.

“At the end of the day I think my son will not thank me for giving up…sabi ko I can make this work.”