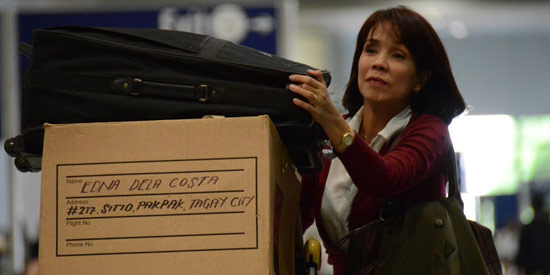 Edna, the first indie film directed by award-winning actor Ronnie Lazaro, has been Graded “A” by the Cinema Evaluation Board (CEB).

Starring Irma Adlawan, Edna tackles the real and imagined fears of overseas Filipino workers. Her title character is a teacher who goes abroad to provide a better future for her family. Edna leaves the Philippines, wishing for a better life for everyone but she returns to find a new family in place. Direk Ronnie is cast as the husband of Irma’s character.

The film’s executive producer, Anthony Gedang of Artiste Entertainment, says that he is humbled and honored to receive a Grade “A” for Edna, his second film.

“I’m overwhelmed by this achievement,” said Gedang. “I have just produced two films: Ataul For Rent in 2007 and eight years later with Edna, and I’m happy to share to everyone that both received Grade ‘A’ from CEB. Board members said they found the film brave and compelling.”

Edna will have its special Philippine premiere as part of Cinemalaya 2014 (Year 10). This one-time screening will take place this Thursday, August 7, at 6 p.m. at the CCP Little Theater, Roxas Blvd, Pasay City.