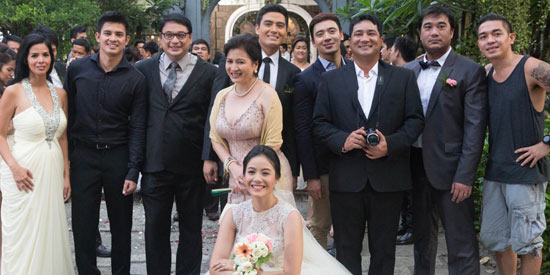 Separados (spelled as S6parados) could not have been produced at a better time. Everyday, we see men who are trying to be men at a time when it’s very difficult to be one.

In an era when traditional gender roles are flimsy as paper and women are gaining more power, men find themselves trying to prove their worth more, leaving them a tad exhausted and constantly frightened.

Separados takes us into the psyche of six men coming to terms with failed relationships, showing their gradual unraveling as they question their own mettle and their very manhood.

An established restaurateur (Victor Neri) annuls his marriage because of sexual incompatibility with his wife; a car salesman (Jason Abalos) is separated because of drug-related issues; a drunkard (Alfred Vargas) separated because of his drinking problem and religious differences; a call center agent (Erik Santos) marries his boss and becomes a physically abused husband; a bank manager (Ricky Davao) suffers three decades of marriage as a homosexual; a former seaman (Anjo Yllana) temporarily out of work is trapped in a perennial power struggle with a wife who feeds the family from her tiny business.


As they hide behind bravado to mask their pain, they silently devise ways to get out of their situation. Some do but for some, the Fates have more interesting things planned out.

Men are generally thought of as stoic when dealt with a heavy blow but director GB Sampedro was able to bring out the hidden side of men as they deal with the pain and anxiety of separation.

Curiously enough, the movie also deals with the weaknesses of men that make them prone to abuse in relationships: a coo and a kiss from a lover faking repentance, the soft persuasions of a domineering wife, the traps of sexual and social convention.

Separados would be an interesting study for what could be an emerging male version of feminism.

The film deals not only with physical separation of partners and its effects on men but emotional disconnection as well with people they have invested emotions in.

The film is a breath of fresh air for local cinema that is growing stale with rehashed kabit stories. At the same time, it may be starting a trend, a new way of seeing men.

Directed by GB Sampedro, Separados is an official entry to the New Breed category of Cinemalaya X. It is being screened at the Cultural Center of the Philippines as well as Ayala Fairview Terraces, Alabang Town Center, Trinoma and Greenbelt 3.