CINEMALAYA 2014 REVIEW: #Y presents a cutting look into the pulse of troubled teens 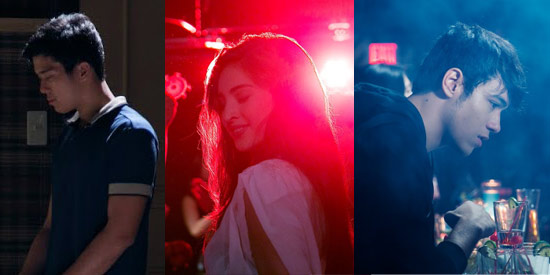 In #Y, Elmo Magalona (left) plays a young man contemplating suicide. His best friends are portrayed by Coleen Garcia (middle) and Kit Thompson (right). Directed by Gino Santos, this Cinemalaya 2014 entry is being screened until August 10 at the CCP as well as Ayala Fairview Terraces, Alabang Town Center, Trinoma and Greenbelt 3.

#Y is a film with a unique title. The letter refers to the Generation Y, the next breed of citizens after Generation X, while the hashtag marks the prevelant use of current technology and social media.

The Cinemalaya 2014 entry #Y actually revolves around a lost, young man who is serious about suicide.

The main characters of the film can be considered quite privileged since they belong to the upper middle class strata. They use their mobile devices extensively and dress fashionably while partaking in chemicals (read: taking drugs) and attending parties. They are about 20 years old, considered responsible adults but still coddled by Filipino tradition. Their school life is rarely touched upon, focusing more on their social status and sexual activity.

Despite his well-off status, the protagonist Miles (played by Elmo Magalona) is plagued with existential thoughts and problems. The film strives to find meaning in his life but he can't find such value, hence the regrettable outcome. So what is presented is a slice of life take on the four companions and their “First World” problems. This might seem like it is aping situations in U.S. teen dramas but, the truth is, the film tells it as it is. Such ideas and themes might not speak to all local teenagers, especially since this is considered the rich kids' crowd, but it is reality nonetheless.

The motivation of Miles to take his own life is not quite adequately explained. He elected to expound on his thoughts in the beginning with his first attempt and the body of the film supposedly should have given him more reasons to carry on with the act.

His character argues: “Being happy and having no right to be unhappy are two completely different things.”

There are statements about difficulty in life, being caged plus truth and lies but somehow the chain of events do not lead up to a solid conclusion. The side twist should have been an illuminating reveal instead of something included as a 'gotcha' factor too. After all the events he had gone through, the only concrete explanation was a matter of timing? Absurd. This is unless the theme of the film is to actually show how pointless suicide really is or how the teenage mind revels in irony.

There is a narrative hiccup concerning the other three characters’ points of view. The film is told as a story by the protagonist. It maybe done retroactively but it is his perspective and he should have no insight to his friends' innermost feelings and thoughts unless they were shared to him. Those extra sides to the story were needed to flesh out their characters (and one is necessary to the plot) but they weaken the story structurally. The whole bit about religion, while interesting, could even be removed without affecting the plot.

The subtitles switching on and off becomes a distraction because of the use of Taglish. It sometimes even translates straight English dialogue. Consistency would have been better. There is a mistake during the suicide hotline scene where "everything is hopeless" while "'tang ina" is literally "son of a bitch" instead of an f-bomb.

One subplot that seems to be taken straight from newspaper headlines involves the lavish lifestyle of a family believed to have benefitted from an alleged scam.

The film contains genuine insight and wit, though is somewhat hampered by delivery. Some actors are more comfortable in Filipino than in English and vice versa. All the young actors show great potential and a few years under their belt would develop their already considerable talents.

Coleen Garcia pulls off a sassy portrayal of a promiscuous girl and towards the end of the movie, she shows her dramatic side as she mourns a tragic loss.

Kit Thompson is also quite a natural and he registers very well onscreen. Whether he is supplying drugs to his friends, being a douchebag boyfriend to Sophie Albert’s character or satisfying his carnal cravings, all of it seems second nature to him.

Sophie Albert looks too mature for her age and it’s not helped by the conservative wardrobe prepared for her as the virgin (described as “flying v”) in the group.

#Y is a slick production with modern sensibilities. The twist, the fake-out, the testimonial treatment and general demeanor of the cast scream foreign influences but it still presents a cutting look into the pulse of the troubled teen. Most films in the same vein about the local youth would be welcome.

Directed by Gino Santos, #Y is an official entry to the New Breed category of Cinemalaya X. It is being screened until August 10 at the Cultural Center of the Philippines, Trinoma, Greenbelt 3, Ayala Fairview Terraces, and Alabang Town Center.