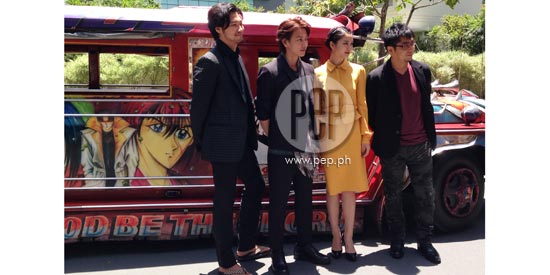 (L-R) Munetaka Aoki, Takeru Satoh, Emi Takei, and director Keishi Otomo were happy to see the Rurouni Kenshin-themed jeepney. After this ceremony, the stars attended the press conference held in Makati City. (To view photos of the event, CLICK HERE)

And so they became warriors of peace (and friendship) in real life.

The director and stars of Rurouni Kenshin: Kyoto Inferno have been recognized as “Cultural Friendship Ambassadors to the Philippines.”

Their esteemed titles were conferred today during their visit to Manila for the Asian premiere of the hit Japanese action film.

“I am lost for words with the warm and really passionate reception we received from the Filipino fans and community,” said Satoh in Japanese. 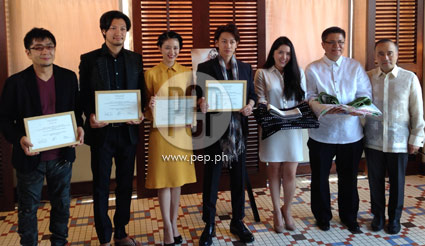 In an exchange of gifts, Soliven gave each cultural friendship ambassador a shawl that was hand-woven using the old Ikat tradition of tying and dyeing segments of thread before the actual weaving process.

“These tokens reflect the culture and dedication of the Filipino people,” explained Soliven.

The newly-appointed Cultural Friendship Ambassadors then presented Soliven and councilor Puno-Ramos a “yukata” (or a casual summer kimono) as their ceremonial gift.

As a post-program treat, the stars went outside for a photo call, where they got to pose alongside a Philippine jeepney that was painted with Rurouni Kenshin characters. 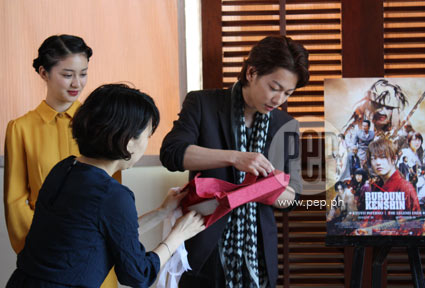 Takeru Satoh (right) had quite a difficult time opening the gift. “Oooppss! I can’t figure out how to open this… So you really made it very secure,” he quipped as his co-star Emi Takei (wearing yellow) looks on.