Maricel Soriano takes care of her brood in "Bahay Kubo" 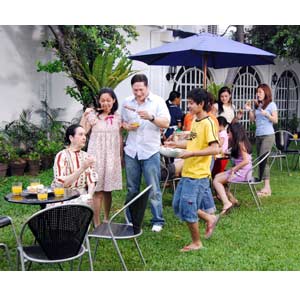 Mother Lily Monteverde of Regal Entertainment might not have produced a follow-up of the Mano Po series, but this year she has created yet another family movie that is expected to touch the hearts of viewers.

The screenplay was written by the talented comedy-writing tandem of Suzette Doctolero and RJ Nuevas, and helmed by award-winning director Joel Lamangan. Bahay Kubo (A Pinoy Mano Po) is one of Regal's entries to the 2007 Metro Manila Film Festival, aside from Desperadas and Shake, Rattle, and Roll 9.

In Bahay Kubo, Maricel plays Eden, a nurturing and headstrong woman who is blessed with six adopted children and one biological child. The Diamond Star is paired with Eric Quizon who plays Eden's husband, Perry. Just when Eden has cared for the children deeply and grown close to them, circumstances force the family to break up. The kids leave one by one and the once happy and full bahay kubo becomes lonely and empty.

One of Eden's adopted children is Lily (Marian Rivera), the eldest of the brood. When Perry mysteriously disappears, Lily becomes a pillar of support for the grieving wife. The closeness between Lily and Eden becomes a source of envy for Rose (Shaina Magdayao), the only biological child.

Mother Lily describes her latest project as "full of heart, full of emotion." She adds, "We hope that it will entertain and touch hearts, and also make families closer and more appreciative of each other."

As much as viewers will cry tears of longing, they will also cry tears of joy, thanks to the comic relief provided by Bearwin Meily, Eugene Domingo and the inimitable Ms. Gloria Romero. Eugene plays Eden's best friend Marang, a wannabe actress, while Ms. Romero is Maricel's adoptive mother.

Writers RJ Nuevas and Suzette Doctolero made sure that family members won't leave the theater without shedding a tear while watching Bahay Kubo. This Regal Entertainment MMFF entry opens in theaters starting December 25, 2007.