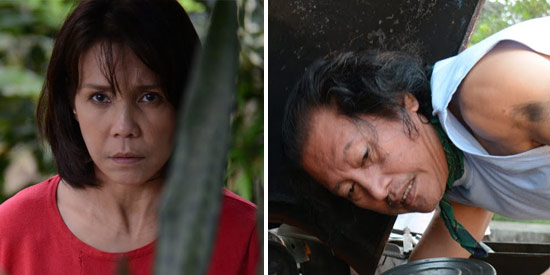 Irma Adlawan (left) plays the title character in Edna, which is the directorial debut of Ronnie Lazaro (right).

Multi-awarded actor Ronnie Lazaro makes his directorial debut with Edna, an overseas Filipino worker (OFW) tale that had its maiden screening last August 7 at the Little Theater of the Cultural Center of the Philippines (CCP).

The movie—a part of Philippine Premieres, an out-of-competition section of the 2014 Cinemalaya Philippine Independent Film Festival—was screened to a capacity and appreciative crowd.


Edna has also been graded “A” by the Cinema Evaluation Board (CEB); thus it gets 100 percent tax rebate.

But the audience’s full attendance and applause, and the CEB’s top rating are just three reasons why Lazaro’s first foray into movie directing is a success.

There are a few more. For instance, his ability to tell a coherent and compelling story. The movie, written by ace playwright Layeta Bucoy, is about a teacher-turned-caregiver named Edna dela Costa, who, after working for many years abroad, comes home during Christmas time to a family whom she no longer knows and cannot trust anymore.

One by one, Edna (played by Irma Adlawan) discovers the lies and deception woven together by her husband Bobby (Ronnie Lazaro), their eldest son Julius (Nicco Manalo) and their only daughter (Mara Marasigan).


Edna’s only ally and fellow victim is her and Bobby’s youngest son Carl (Micko Laurente).

In the end, Edna concocts a deathly scheme that leaves the audience in suspense and shock, but—wait till the last scene—with relief and hope, finally!

The director deftly uses devices in revealing the protagonist’s innermost thoughts and feelings.

A case in point is the big and scary rat that runs around the house, which has largely been turned into a gambling den. Every time Edna sees the rodent, which also symbolizes decay, her dismay and disgust in her family is heightened.

Another example is the sharp and jarring noises that Edna suddenly hears especially when she makes a shocking discovery. This way, her pain and anguish are increased.

As the director, Ronnie is also able to bring out inspired performances from his actors, including himself. Irma creates her Edna character with believability, consistency, and sympathy. She looks meek and submissive, but she also reacts and fights back. She’s forgiving and helpful, but she doesn’t let her spirit be broken.

Irma is so effective in her role that when she makes the final act of defiance—spelled out in bold letters—she earns the audience’s unanimous approval.

As antagonists, Ronnie, Frances, Nicco, Sue, Mara, and Kiko are fittingly hateful, so much so that the audience would want to throw things at them. Hopefully, this strong reaction will serve as a wake up call to OFWs’ abusive family members.

On the other hand, Ronnie’s initial directorial job is not perfect. While the decision to pull back on drama is commendable, apparently veer away from the usual OFW stories, it leaves out crucial information.

Like what exactly happened to Edna abroad? There are moments of implied violence and even torture that apparently traumatized her (maybe that’s the reason why she can’t leave the house without clutching a big umbrella), but those remain untold and unexplained.

OFWs in general, though they may have the same hopes (earn more, have better lives), and similar experiences (bouts of homesickness, loneliness), each one still has his or her own unique story to tell.

There are more Edna stories waiting to be told.