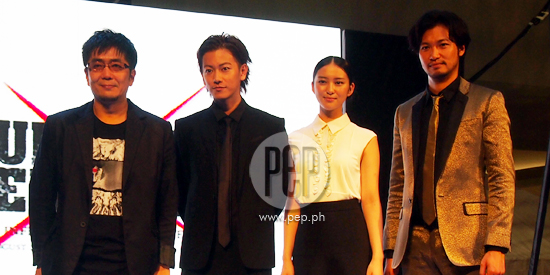 Kenshin Himura returns to the big screen after two years with a two-part sequel—Rurouni Kenshin: Kyoto Inferno and The Legend Ends.

This 2014 is a lucky year for Filipino otakus as the lead stars of the film—Takeru Satoh (who plays Kenshin Himura), Emi Takei (Kamiya Kaoru), and Munetaka Aoki (Sagara Sanosuke)—paid a short visit to the Philippines.


The stars and the director of the movie, Keishi Otomo, attended the premiere night held at SM Megamall last August 6.


The successful 2012 release of Rurouni Kenshin: The Movie in local cinemas was definitely one of the reasons why the Philippines was chosen to host the Asian premiere, just days after the premiere in Japan.

The wandering swordsman (also known as Samurai X) continues his adventures in Rurouni Kenshin: Kyoto Inferno, which follows the Kyoto Arc of the manga and anime.


The film introduces a new super villain in the form of the heavily bandaged Makoto Shishio played by Tatsuya Fujiwara (also known for playing the lead characters in Battle Royale and Death Note). Makoto Shishio is the successor of the legendary assassin Hitokiri Battōsai who now lives in peace as Kenshin Himura.

Shishio poses a new threat as he plans his revenge to overthrow the Meiji government through the help of his elite force called the Juppongatana (“Ten Swords”).


Kenshin’s new life at Kaoru’s dojo is interrupted when Saito Hajime (played by Yosuke Eguchi)—the former captain of the Shinsengumi who assumed a position in the Tokyo's police force—and the Meiji government seek his help to stop Shishio. Now the story revolves around Kenshin and how he would defeat Shishio after vowing never to kill again.

The film manages to squeeze in the story in just two parts, and sticks to reality by omitting the fantasy elements from the anime and manga. Fans will be pleased to know that the film follows the original story even though the filmmakers made slight modifications.

The production design is impeccable and would most likely leave the audience in awe for being polished down to the smallest details. The 19th century Meiji era is recreated by shooting in picturesque prefectures in Japan. The film culminates in a giant warship called "Purgatory" that is truly impressive for its epic size.

Director Keishi Otomo should be commended for his excellent direction and exciting fight choreography. The fight scenes have definitely improved and are more compelling compared to the previous movie.

Takeru Satoh, Emi Takei, and Munetaka Aoki gave awesome performances on the film as their characters Kenshin Himura, Kamiya Kaoru and Sagara Sanosuke, respectively. Munetaka is a perfect fit for the role and definitely stood out for bringing Sano’s crazy antics to life.

Ryunosuke Kamiki, who played the right hand man of Shishio called Seta Sōjirō, exceeded expectations with his nuanced performance of an innocent-looking yet sadistic killer. It's too bad that he had limited onscreen time.


Some characters who played important roles in the anime and the manga were underutilized in this sequel. Half-Filipino, half-Japanese Maryjun Takahashi—who portrayed Shishio’s lover Yumi Komagata—didn’t stand out and looked more or less like a wallflower for having a few cameo appearances.

There were big changes to the character of Shinomori Aoshi (Yusuke Iseya), which in turn affected Takani Megumi’s (Yu Aoi) character arc.

Overall, Kyoto Inferno is the perfect introduction to Kenshin’s battle with his greatest enemy, Shishio. Hopefully, we’d get to see more of the Juppongatana in action in the final part of the trilogy.


The second part of the sequel, Rurouni Kenshin: The Legend Ends, will be screened starting September 24.