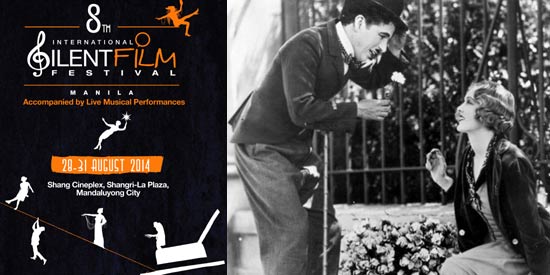 The 8th International Silent Film Festival will run from August 28 to 31 at the Shangri-La Cineplex. The Charlie Chaplin film City Lights, to be screened on August 28, will be accompanied by Radioactive Sago Project.

The 8th International Silent Film Festival, known for being the only one of its kind in Asia, highlights milestones in cinematic history as film and contemporary live music collaborate again from August 28 to 31 at the Shangri-La Cineplex.

Representatives from the festival’s organizers, namely the Film Development Council of the Philippines (FDCP), the Japan Foundation Manila, Instituto Cervantes, the Goethe-Institut Philippinen, and the Embassies of Italy, United States of America, and France stressed the importance of introducing silent film history to younger audiences with this year’s selections.

Last August 14, Petra Raymond, director of the Goethe-Institut Philippinen, spoke to the press about the festival’s role in presenting history.

“This unique and experimental event has relations to cultural heritage and traditions, and a way to connect young people through the understanding of history. The festival is an entertaining way of taking that responsibility and engaging these young audiences,” said Raymond.

This year, the festival kicks off by commemorating the centennial of Charlie Chaplin’s debut in the entertainment industry with the American film City Lights, written and directed by Chaplin himself in 1931. The film, which will be screened on August 28 at 8 PM, will be accompanied by Radioactive Sago Project, who has emphasized the band’s efforts to be faithful to the original music composed by Chaplin as much as possible.

“Chaplin is the icon of the silent era, and it was difficult to change his work on the music,” said Francis de Veyra, who represented Radioactive Sago at the press conference. “We’re making it close to the original music and also make modern arrangements, so the music and the film are going to be a double treat for the audience.”

Der müd Tod (Destiny)from Germany, meanwhile, will see the second collaboration of German composer Pierre Oser with young composers from the Manila Composers Lab on August 29 at 5 PM. The film, which follows the story of a young woman who wants to reunite with her lover, will also show three different historical eras embedded in its plot, which proved to be a challenge to young composers.

“Writing music for a film requires putting yourself in another space, another time, so this particular film really put us in space/time limbo. The challenge was to have the composers think 1921, but also think here and now,” said Jonas Baes, director of the Manila Composers Lab.

France, who will participate in the festival again after a four-year absence, will be treating audiences to a historical entry with Verdun: visions d’histoire, made by Leon Poirier to commemorate World War I in 1927. The film, restored on the occasion of the centennial of the war, features soldiers who themselves fought in the battle of Verdun in 1918. “Verdun” will be screened on August 29 at 7:30 PM, to be accompanied with music by award-winning French pianist Hakim Bentchoula-Golobitch, who is traveling around the world with this film.

Ma l’amor mio non muore (Love Everlasting), Italy’s entry this year, sees the transition of Lyda Borelli as an Italian theater actress to a film star in 1913. The film, which will be screened on August 30 at 5 PM, will be accompanied by Caliph8, together with artists Fred Sandoval, Paolo Garcia, and Fame Flores.

Japan also recovers a gem from their film archives with Chuji Tabi Nikki (A Diary of Chuji’s Travels), a story of a Yakuza boss who is forced to conceal his identity due to crimes committed by his own men. Experimental indie electronic duo KaapiN, tapped from Cagayan de Oro, will mix sonic soundscapes with visual art and theatric elements for this film on August 30 at 7:30 PM.

Another transition can be seen in Spain’s Curro Vargas, which is the film adaptation of a popular zarzuela about love set in the 19th century in a small town in Granada. Glass Cherry Breakers, a new band composed of Maegan Aguilar on vocals, Sammy Asuncion on guitar, Louie Talan on bass, Nikki Cabardo on keyboards, Ronald Tomas on sax, and Wendell Garcia on drums, will provide music for the film on August 31 at 5 PM.

The Philippines’ Ang Tigmo sa Aking Pagpauli (Riddles of My Homecoming), which won Arnel Maldoquio the Best Director award at the 2013 Gawad Urian, will cap off the festival on August 31 at 7:30 PM. The film, which is based on the belief that a person travels back to his hometown upon his death, will be accompanied by Kalayo.

All films will be screened for free at the Shangri-La Cineplex.