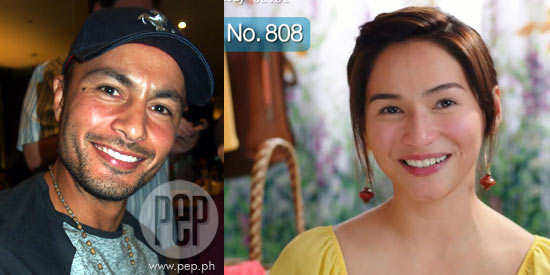 “I’m having my first attempt at rom-com [romantic comedy genre], which I am really enjoying,” says Derek Ramsay about his 2014 Metro Manila Film Fest entry English Only, Please. Jennylyn Mercado serves as his leading lady in this movie directed by Dan Villegas.

Derek Ramsay is building a new friendship with his leading lady Jennylyn Mercado.

Derek and Jennlyn will be paired in the 2014 Metro Manila Film Festival entry English Only, Please.

In an interview with the Kapatid hunk actor recently, he related his working experience with Jennylyn.

“We share the same room, my team and her team, we all get along and we’re always laughing when we’re not in front of the camera.

“We go out together and have lunch.

For celebrities who are usually bound by exclusive network contracts, Derek said it’s refreshing to work with a co-star from a different TV station.

He reiterated, “It’s always a pleasure to work with someone new for me, especially she’s from another network.

“I don’t get to work with that much people before.

“It’s nice that I have someone new to be paired with in a really nice project.

Directed by Dan Villegas, English Only, Please is about a Fil-American guy who needs someone to help him with his Tagalog.

In an earlier interview with Derek, he told PEP about the movie: “I’m a Fil-Am. My girlfriend broke up with me and I am really angry and I wrote her this nasty letter. But I don’t know how to speak Tagalog and I really wanted to say it in Tagalog para mabigat.

“The letter starts, ‘Hey you, sl*t…you liar…I go online and see who can translate this letter for me. I meet Jennylyn Mercado.”

This role requires the Fil-British model-turned-actor to recall the time when he was still struggling to speak the vernacular.

Derek also reveals, “I thought it would be the first film where I wouldn’t be taking off my shirt but I’m wrong. Meron pa rin,” he said with a smile.