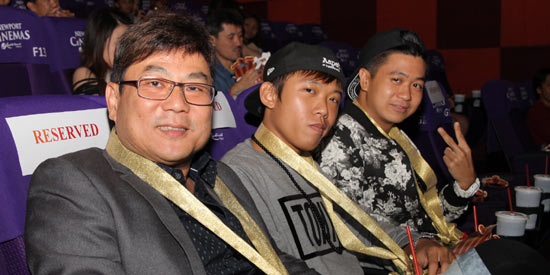 (From left) The Lion Men: Ultimate Showdown director Jack Neo, actors Wang Weilang (who plays Mikey in the movie) and Maxi Lim (who is cast as Babyface).

Actors Wang Weilang and Maxi Lim and film director Jack Neo were present during the premiere to have their pictures taken with Filipino fans. They also eagerly answered questions about the movie.

The Lion Men: Ultimate Showdown is a sequel to Neo’s earlier film, The Lion Men. The first part was shown this year in Singapore during the Chinese New Year and the sequel was screened last June. Both films fared successfully in the Singapore box office.

Ultimate Showdown has been shown in Malaysia, Taiwan and Brunei. According to Neo, they are now planning to have screenings in China.

He explains, “When you see part two, you will see the characters’ individual stories. But even if you don’t see part one, [you will] still understand.”

Ultimate Showdown’s story picks up after Mikey and Babyface’s superb performance during the first round of the Lion Dance competition.

Singaporean actor Wang Weilang was an actual Lion Dancer for eight years before he auditioned and bagged the role of Mikey.

Meanwhile, Maxi Lim (who played “Babyface”) was a stuntman for a TV drama in Singapore before starring in The Lion Men.

Playing the girlfriend who wins the heart of both Mikey and Shi Shen is charming 18-year-old Chinese actress Eva Cheng.

When PEP.ph suggested that Wang Weilang’s unconventional leading man appeal is a breath of fresh air amidst popular movies that partner pretty men with equally pretty girls, Director Neo jokingly quipped, “[He is] not pretty.”

The Lion Men: Ultimate Showdown is similarly unconventional in its storytelling. It is a romance movie enveloped inside an action and comedy film that also involves dance.

Also unconventional is the kind of dance showcased in the movie.

Lion Dance is a traditional dance seen mostly in Chinese and Asian cultures. In the movie, it becomes a combination of stunts, wire work and theatre performance with hip-hop and pop culture references.

Director Neo explains the reason for incorporating new elements with the old rituals of Lion Dance:

“We are trying to use this to tell people that [the art of] Lion Dance can be performed in creative ways. The traditional Lion Dance is very simple [using] drums and costume. You can see in the movie we used a new angle. We encourage people to think of something new. Lion Dance can combine everything together, including animation.

“We hope this tradition and performing art can actually continue…If you want to continue you have to add in new elements to support it or else it will become monotonous. People will think it is old. If we have creative idea inside, Lion Dance can go bigger.”

Also a new element in the movie is placing a youthful love story within the centuries-old practice of Lion Dance.

“If you’re looking for a show with Lion Man action and love, this is the movie that should not be missed. I’m giving a different dimension, different angle of love story. Love story is usually at school [featuring] a group of youngsters. Here, the environment is the Lion Dance.”

Director Neo also emphasized his belief that Lion Dance can be considered an extreme sport.

“Lion Dance is actually very popular among Asian countries. Filipinos I’m sure they know Lion Dance. Lion Dance is not just a traditional performance art. To me, Lion Dance is an extreme sport. You can see the way they do [stunts]. It is very challenging.”

Lion Men and Lion Men: Ultimate Showdown was shot in Singapore for 72 days. The films required a Hong Kong trainer to coach the actors for three months to perfect their Lion Men stunts.

Wang Weilang revealed that at 26 years old he is considered “old” and could not do the same stunts he used to do when he was a Lion Man.

For the movie’s fight scenes, Maxi Lim revealed, “I can fight.”

Director Neo and the cast members had to leave the Philippines the next day to shoot another movie starring Wang Weilang and Maxi Lim, which was described as “a military journal about navy divers.”

Jack Neo wishes that Lion Men: The Ultimate Showdown will be shown in Philippine theatres. “If I’m given the chance, we can do some screenings if possible.”