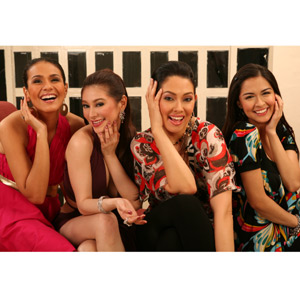 (L-R) Iza Calzado, Rufa Mae Quinto, Ruffa Gutierrez, and Marian Rivera star in a comedy of four half-sisters who don't always see eye to eye about love and their own interactions. Desperadas (All They Need is Love) will open in theaters nationwide starting January 1, 2008.


Desperadas (All They Need is Love) follows the colorful and often funny twists and turns in the lives of four half-sisters as they struggle to cope with love...and each other.

This Regal Entertainment movie tackles the issues facing women regarding their families and relationships with members of the opposite sex. Four beauties are chosen by Mother Lily Monteverde to topbill this riotous comedy involving four beautiful half-sisters with different idiosyncrasies.


Directed by Joel Lamangan, Desperadas showcases some of the country's most captivating and stylish actresses today—Ruffa Gutierrez, Rufa Mae Quinto, Iza Calzado, Marian Rivera—in unforgettable roles set to make the audience laugh, cry and be entertained this Christmas season. Desperadas is one of Regal's entries to the 2007 Metro Manila Film Festival, aside from Bahay Kubo (A Pinoy Mano Po) and Shake, Rattle and Roll 9.

SYNOPSIS. Isabella, Patricia, Stephanie, and Courtney are half-sisters. Their mother, now a successful woman, is proud of them as she takes special notice of each one's idiosyncracies.

Ruffa Gutierrez plays the role of Isabella, a single mother who somehow lost her way, a perceived brat who antagonizes her sisters. She is being courted by a devoted ramp model Vito, played by popular singer and host Jay-R.

Patricia (Rufa Mae Quinto) is a sexologist who has written books on sexual relationships. She is married to Dave (Wendell Ramos) who works as a banker. Stephanie (Iza Calzado) is a demure, conservative female lawyer who is married to a boring obstetrician named Richard (TJ Trinidad). Courtney (Marian Rivera) is the ditzy, accident-prone youngest half-sister who is a swimmer and underwear designer. She is about to be married to a basketball star named Patrick (Will Devaughn).


The story begins with the birthday celebration of Courtney, where the personal differences of the half-sisters surface. Isabella comes off as the brat who enjoys antagonizing her sisters, particularly Courtney, whom Isabella teases for deciding to marry Patrick whom Isabella claims to be her former lover.

Isabella, it turns out, has her own unresolved personal issues. For a long time, she was not recognized by her father as his daughter. It was only on his deathbed a few years ago that she was acknowledged as his flesh and blood. The long years of being rejected by her father has had an impact on Isabella who has been craving for attention all these years. Her tendency to antagonize her siblings is her way of drawing attention to herself.


The conservative Stephanie, meanwhile, abhors Patricia's liberal attitude toward sex. However, she would secretly buy and read Patricia's books on sex to learn enough to seduce her lackluster husband.


Patricia thinks her life is perfect, believing that her liberal attitude puts her above the petty problems that hound her other siblings. Unknown to her, she has been starting to alienate her husband Dave, who gets drawn to someone whose identity would later shock Patricia.

Courtney's forthcoming wedding becomes the big event that draws the siblings together despite their differences. While preparing for the wedding, their interaction brings to the fore their issues against each other.


However, a realization hits the four sisters, making them all realize that they are, after all, one family despite their differences.


Desperadas will touch the audience in a light but endearing way as they relate to the situations and lives of the characters. This Joel Lamangan film is a must-see movie for everyone who believes that in this world all we really need is love.

This Regal Entertainment MMFF entry opens in theaters starting January 1, 2008. It will have a premiere at Cinema 10 of SM Megamall on Sunday, December 23, 2007.