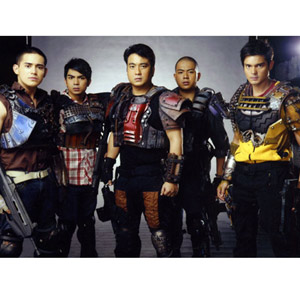 
In the not too distant future, Filipinos assert their will to survive in the sci-fi film Resiklo. Boasting special effects by Riot Inc., this fantasy adventure stars Ramon "Bong" Revilla Jr. and other cast members who find ways to protect themselves from an alien race trying to annihilate them.

The Filipinos living in the sanctuary Paraiso recycle scrap materials in a junkyard to create robots that defend them from the "Balangs" (locusts) and alien creatures. The movie's title Resiklo means 'recycle' in English.


Resiklo is one of the nine official entries in the 33rd Metro Manila Film Festival.

SYNOPSIS. In 2021, a global devastation brought about by an alien invasion has left the whole planet in shambles. In the Philippines, a rag-tag group of survivors strives to survive in a secret sanctuary called "Paraiso."


Crisval Sarmiento (Bong Revilla Jr.), an ex-military colonel, is the reluctant leader who defends the whole compound from two threats—the "Mutanos" or mutated humans serving the insect-like alien race (called "Balangs" or locusts by the humans), and the alien invaders themselves.

Crisval, together with other human survivors, soon discovers that the real reason the "Balangs" have invaded the planet earth is to colonize humans for their own ends.


In order to survive, the humans must go up against a technologically advanced alien race by using robots they have engineered from recycled parts of derelict everyday machines and military components. The ingenuity and resourcefulness of Filipinos become apparent when they use scrap metal, old tires, and other junk material to create robots that will defend them from annihilation.


In the midst of this war for human survival, love and faith become the greatest weapons of the human race.


This is a story of the human spirit fighting against a malevolent force out to destroy the only place we call home.


Written and directed by Mark A. Reyes