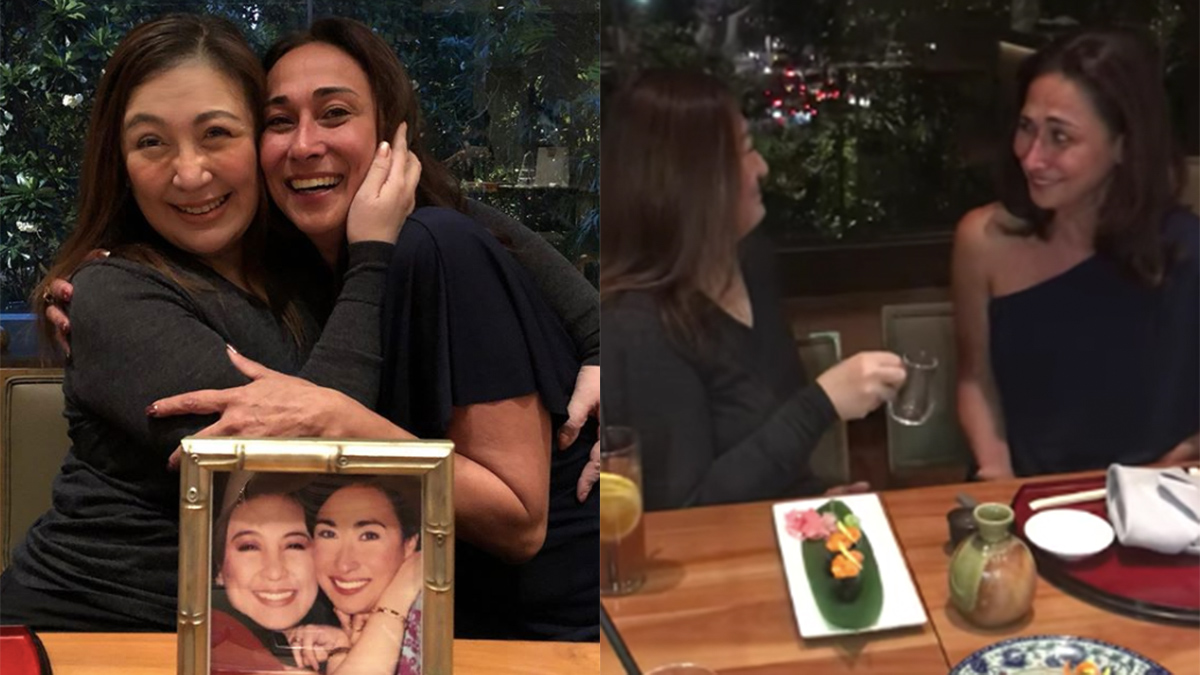 After 34 years, Sharon Cuneta and Cherie Gil are seen doing the iconic wine-splashing scene in Bituing Walang Ningning, but this time, it's Sharon's turn to splash wine on Cherie's face!
PHOTO/S: @reallysharoncuneta on Instagram / Sharon Cuneta Network on Youtube

As part of their reunion, the two lead stars of the 1985 movie Bituing Walang Ningning re-enacted a famous scene from the film, where the villain Lavinia (Cherie) splashes wine on Dorina's (Sharon) face.

It was also the scene where Cherie first spewed this now iconic line: "You're nothing but a second-rate, trying-hard copycat!"

Before doing the scene, Sharon and Cherie enjoyed hilarious moments that led them to doing three takes of the re-enactment.

As they were preparing for the scene, Sharon told viewers: "This is trademarked to Miss Cherie Gil. Tommy Abuel gave her this line!"

Seeing what Sharon would use as her wine glass, which was actually a syrup glass, Cherie put a little amount of Sake in Sharon's glass, saying: "Lagyan mo ng konti para malagyan ako ng konti!"

For their second take, both actresses could not stop laughing, especially Sharon who was already delivering Cherie's villainous lines.

"Ako naman, me, I'm trying to be kawawa pero I don't believe myself!"

Finally, on their third take, Sharon and Cherie managed to do the scene.

She wrote in her caption: "Ahhhh mission accomplished !!! Thank you for being the best friend ever. And for being game always and for a wonderful evening and for your lovely children and for the gift of you and your big heart !!! love you @reallysharoncuneta #dorinalaviñaloveteam"

Sharon and Cherie also posted photos of their reunion dinner on their respective Instagram accounts.

Sharon again posted another photo with Cherie, and wrote in the caption,"Your Dorina and Lavinia. Friends forever!!!"

Sharon and Cherie also took a video of themselves thanking Noel Ferrer, PEP Troika columnist and talent manager-radio show host, for making the reunion possible through his radio show.

Cherie said, "I have to, really, really! You are the one who created this, who made this happen, thank you for breaking the ice and putting us together!"

Cherie then told Sharon, "I've been begging you!"

Sharon picked it up, "Whenever I would bump into the press, 'Nakita ko si Cherie, kamusta ka daw? Huhu na-miss ko si Cherie!'"

Sharon then said, "Noel, we're praying for a movie and commercials!"

In 2017, Cherie created an Instagram account dedicated to her Lavinia Arguelles character from the blockbuster hit Bituing Walang Ningning.

She wrote in the Instagram account's bio section, "My mission: to arrive to 100 victims and relive this 1986 iconic scene with every relevant person I meet in the 21st century."

Posts on the Instagram accounts were all videos of Cherie re-enacting the scene as Lavinia and splash water or wine on the faces of her co-actors.

Cherie also re-enacted the scene with her mother, Rosemarie Gil, but, not to be outdone, the mom splashed water on the daughter's face.