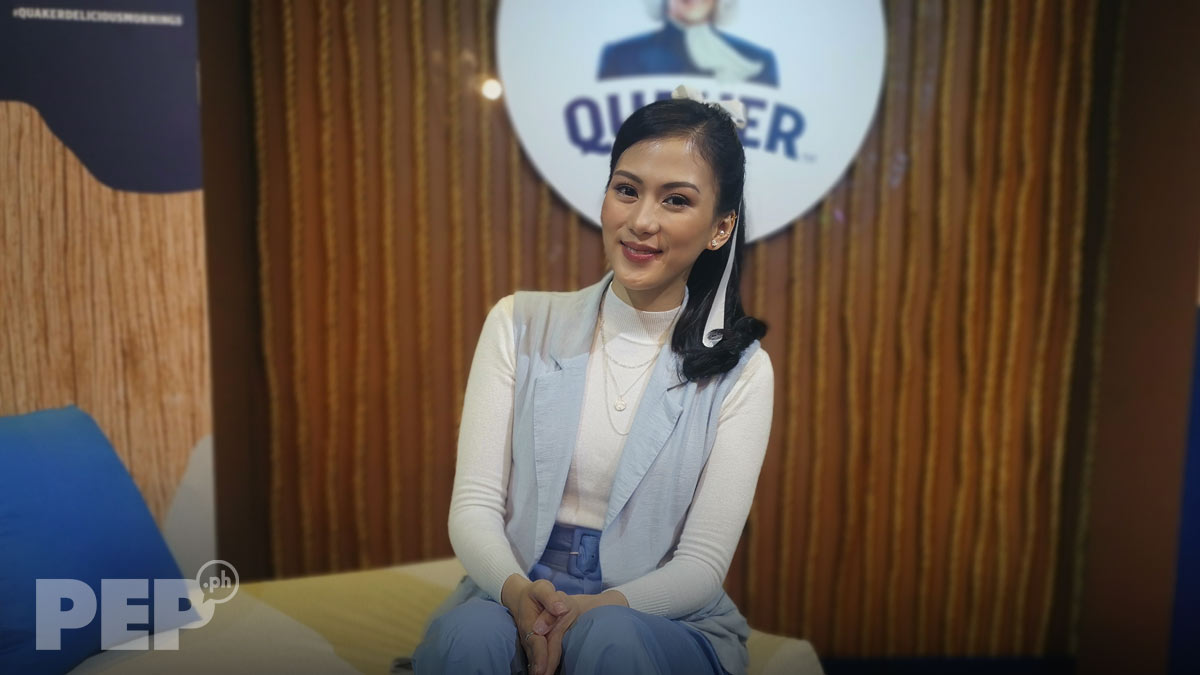 Alex Gonzaga's character develops a romance with Xian Lim in the movie Love The Way U Lie.
PHOTO/S: Kaye Koo

Alex Gonzaga has been working on a new movie starring Xian Lim (we found out from their production team that they tape at least twice a week on Mondays and Wednesdays).

Titled Love The Way Ü Lie, the movie is produced by TINCAN under TEN17P and directed by RC Delos Reyes. He is the same director who helmed 2018's Mary, Marry Me starring Alex, Toni Gonzaga, and Sam Milby.

At a recent Quaker Breakfast Show event, Alex told PEP.ph (Philippine Entertainment Portal) that the film revolves around "someone coping with depression and someone who is going to pretend and who's gonna lie to help you."

The rom-com is not designed to be exactly real or based on real life events, as Alex explains, "It's not really real, it's more dealing with the other side of... Yun may multo, may... The character of Xian is, namatayan siya ng asawa, and the only one who could reach to his dead wife is me, na ma-i-in love sa kanya!"

Lest anyone think it's very supernatural, it is and it isn't. Alex says it has to be seen to be understood.

So yes, their brand of rom-com is not your traditional romantic comedy.

"It's very comedy, very, the term, yung sa mga rushes namin, yung feels niya is very Korean pero it's all actually shot in Manila, kasi the director RC, our director also in Mary, Marry Me, he wanted something na, parang something to bring back the glory days of Manila."

That is why they have been shooting in places such as Quiapo, Bambang, and Binondo.

Alex actually came up with the concept of Love The Way Ü Lie.

"This one, it's my concept, nagulat ako na dinevelop nila with Dano. I pitched this before, Dano was there, and then Direk RC told me na you know, you pitched something with Dano, we wanna develop it."

Does this mean, that aside from starring in Love The Way Ü Lie, Alex will once again be hands-on just like what she did in the 2018 Metro Manila Film Fest entry Mary, Marry Me?

"They asked me and, of course, they have their own vision, so I let them be. It's different now, kasi with Mary, we were the producer and kami ng ate ko [Toni Gonzaga], kami nag-conceptualize ng story. I was there throughout...I was very hands-on with the story.

"So, with this, I am just an actress, I let Direk do his thing, the writers, and everything, mas iba."

"Siyempre may mga times na nagtatanong sila, 'Are you okay to do this? Okay ba sa 'yo yung line? Masasabi mo ba eto?'

"Siyempre, may mga times na magtatanong ka as an actor, 'Why do I have to do this?' Pero the moment na nagstart kami ng shooting, after the scriptwriting and conceptualization, hinayaan ko na siya, from the first shooting day."

The reason she can let go, even if the movie started from a concept she pitched, is because she wants the filmmakers to really explore their vision.