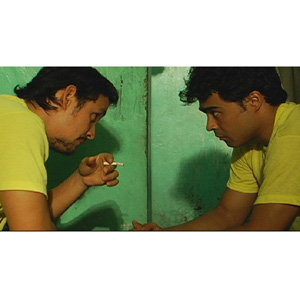 Esteban (Emilio Garcia, left) shatters the peaceful life of Rommel (Sid Lucero, right), who is relishes his freedom in the province with his wife Sita (Ara Mina, not in photo). Selda takes an intimate look into the lives of prisoners who are screwed not only by our penal system but also by their fellow inmates.


The latest film by Ellen Ramos and Paolo Villaluna is controversial. Selda's cast is composed of Ara Mina, Sid Lucero, Michael de Mesa, and Emilio Garcia. What makes Selda unique compared to other controversial R rated films is the rape scene, where the victim is not a woman, but a male convict. Initially, Selda was given an X rating by the Movie and Television Review and Classification Board (MTRCB). This indie film is now rated R-18 and is scheduled for screening early next year.


According to director Paolo Villaluna, "There's no argument that the rape scene is integral to the story, even the MTRCB concedes this. It's not prurient or glorifying violence. The question is, what was going to be shown specifically?" The MTRCB officers, said Paolo, felt they were violated after watching the rape scene, which they considered too graphic. For the indie film director, however, that was the whole point of shooting it in that way.

A hard-fought battle with the censors resulted in a compromise of sorts. "In the end I had to defend the inclusion of certain scenes and exclude a few. But we came away with a cut that maintained the artistic integrity of the film while the board was satisfied too," Paolo tells PEP (Philippine Entertainment Portal) during the December 23 screening of the film at IndieSine, Robinsons Galleria.


While critics may easily classify Selda as another gay movie, the filmmakers and cast members were quick to dismiss such perception. Emilio Garcia, who plays Esteban in the movie, argued: "Wala ka naman nakitang bakla o kabaklaan dun sa pelikula, di ba?" In the film, Allan Paule plays an abusive inmate (Boy P) who lords it over other prisoners. One of his most memorable lines is: "Lalaki ka, lalaki ako, nagkatikiman lang tayo...pumayag ka na."


Sid Lucero, who plays Rommel, informed us that he went through an actor's workshop together with Ara Mina, who plays his wife Sita in the movie. They learned how to establish intimacy and make their love scenes look more natural. Sid narrated, "Direk created a module designed to break physical boundaries. We shared what made us uncomfortable. It was scary because there's this conflict between the artist in me and the person who's getting aroused."

SYNOPSIS. At the start of the movie, Rommel pursues a snatcher who steals his wife Sita's handbag. The thief turns out to be a 12-year old boy who gets run over by a cab during the chase. He gets the blame for the child's death and is imprisoned for three years for manslaughter. Rommel's world turns upside down as almost every person he meets abuses him in one form or another.


Warden Ramos, played by renowned actor Michael De Mesa, is the first to abuse him. The first meeting in the office foreshadows the nightmares Rommel will face while serving prison time. Soliman Cruz and Ping Medina play Rommel's sympathetic cellmates. Mang Jon (Soliman) teaches Rommel how to survive in prison but he has a few secrets of his own, especially the reason for his incarceration.


Ara Mina is the perfect choice for the role of Sita. Just thinking of his wife sustains Rommel through his nightmare in prison.


An interesting debut is the role of Rommel's young daughter Elena played by Madeleine Red. The precocious eight-year-old is the daughter of Danny Red and niece of Raymond Red, the first Filipino filmmaker to win the Cannes Film Festival prize for Anino/Shadows, the Cannes Palme D'Or for Short Film.

Independent filmmakers came in full force to support the digital film. Director Jim Libiran of Tribu praised the story and screenplay of Selda: "I loved how Paolo was able to make use of quantum characters. These are the characters that sometimes pop in and out inexplicably. Their presence and symbolism is integral to the story."

The one-time screening of Selda took place at Cinema 3 of Robinsons Galleria last Sunday, December 23, at 4 pm. The regular run of Selda at IndieSine is tentatively set for February 2008.