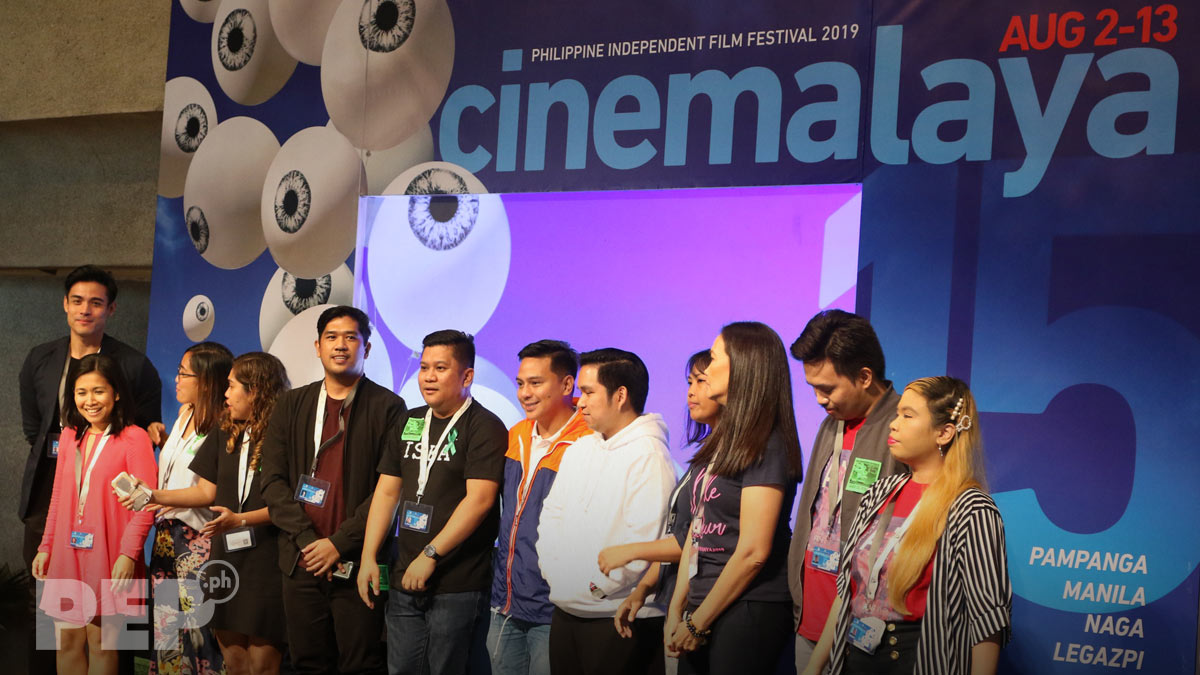 Cinemalaya 2019 will run from August 2 to 11 at the CCP venues, and August 7 to 13 at selected Ayala Malls Cinemas and Vista Malls in Manila, Pampanga, Naga and Legaspi in Bicol, Bacolod, Iloilo, and Davao.

The Cinemalaya Foundation, in partnership with the Cultural Center of the Philippines, marked its 15th year by being cited as the winner of this year's Nikkei Asia Prize for culture and community.

It was cited “in recognition of its tireless efforts to discover gifted filmmakers and invigorate the Philippine film industry by organizing a big independent film festival.”

Cinemalaya 2019 features a diverse lineup of films that range from sci-fi projects to suspense-thrillers to romance films that depict May-December affairs.

Opening Cinemalaya 2019 is the Lav Diaz film Ang Hupa (The Halt), which will be screened on August 2 at the Cultural Center of the Philippines (CCP).

Piolo Pascual and Shaina Magdayao star in this sci-fi/horror film that runs for four hours.

The film is set in the year 2034 AD. Southeast Asia has been literally in the dark for the last three years because the sun hasn’t shone due to massive volcanic eruptions at the Celebes Sea in 2031.

President Nirvano Navarro (Joel Lamangan) is the dictator who controls Manila in 2034. Living in this tumultous dystopian future is Haminilda, a.k.a. Hammy (Shaina Magdayao), a history teacher who sidelines as sex worker Model 37 as well as Hook Torollo (Piolo Pascual), a militant with a mission to assassinate the president.

This marks the Philippine debut of Ang Hupa after it made its world premiere at the Director's Fortnight in the 72nd Cannes Film Festival in May 2019.

This year, Cinemalaya partners with microcinemas in Metro Manila and in the regions for “Kinse sa Sandaan: Cinemalaya Wave at the Microcinemas.”

The closing film is the crime-comedy movie Mina-Anud by Cebuano filmmaker Kerwin Go.

Dennis Trillo, Jerald Napoles, Matteo Guidicelli, and Lou Veloso top-bill this movie, which is based on true events. In 2009, cocaine bricks washed up in the shores of Samar, disrupting the lives of residents.

Mina-Anud will be screened at the Tanghalang Nicanor Abelardo at the CCP next Saturday, August 10, 2019. It is scheduled to be released nationwide in Philippine cinemas starting August 21.

Misterio Dela Noche is another Filipino film that will make its Philippine premiere during the annual film fest.

Solenn Heussaff and Benjamin Alves top-bill this movie that is set in the 1800s.

During the time of Spanish tyranny and oppression, a woman raised in the enchanted woods by nymphs experiences love for the first time from a man from town. When she is later betrayed and experiences heartbreak, hell hath no fury indeed like a woman scorned as she she transforms into the
mythical Aswang out to avenge her pain and let the man suffer forever.

It will be screened on August 4 (Sunday) at 6:15 PM at the CCP Little Theater.

One of the special activities of Cinemalaya 2019 (Year 15) is the launch of Ricky Lee's Film Scriptwriting Workbook. The book launch will take place this Saturday, August 3, at 4:30 PM at the MKP Hall, 4th floor of the CCP.

His new book titled The Ricky Lee Film Scriptwriting Workbook contains tips on writing, story and character templates, guidelines on fleshing out the premise, checklists for stories and for troubleshooting the script, creative triggers and exercises, plus blank pages for notes and doodles.

Considered to be the most-awarded screenwriter of Philippine cinema, Ricky Lee's film writing catalog is made up of Himala, Moral Karnal, Anak, and Jose Rizal. He also wrote the play Himala the Musical as well as the popular scriptwriting manual, Trip to Quiapo.

The book launch is free and open to public brought to you by CCP’s Film, Broadcast and New Media Division and Intertextual Division.

Cinemalaya will pay tribute to actor Eddie Garcia, actress Armida Siguion-Reyna, and production designer Cesar Hernando – all of whom made significant contributions to the Philippine film industry before passing away.

Here is the PEP.ph (Philippine Entertainment Portal) Guide to the full-length entries of Cinemalaya 2019:

"This story revolves around him and three suspects who believe three versions of truth."

According to Xian, he conceptualized this film in 2016, Back then, he had a fascination for caves and the hidden secrets they may contain.

Two years later after the birth of the concept, the plot was further expanded when Xian became a fellow in Ricky Lee's batch 17 scripwriting workshop. Tabon raises questions about one's belief and the lengths we are willing to endure to uncover the absence of meaning in our life.

This sci-fi film is set in the Year 2050 at the Federal State of Bicol. A newly orphaned boy named Mithi moves to a farm to live with his estranged grandfather Mauricio.

When Mauricio falls ill and as the crops in their farm seem to fall ill with him, Mithi embarks on a quest with his malfunctioning robot to search for magical grains that he believes will save the old man’s life.

Elizabeth (Mylene Dizon), a self-made woman in her late 40s, is bent on living on her own for the rest of her days. After her mother passes from years of suffering from a lingering illness, she meets Jon (Kit Thompson), a man 20 years her junior, who convinces her that love knows no age and
that there are no limits to life’s starts. They embark on a May-December affair that is very promising, until Liz realizes that Jon has dreams that she cannot be part of.

In her director's note, Atty. Joji Alonso points out that despite this day and age, the perception of what defines a woman remains. Society continues to confine women because of age, maternal expectations, and others. In Belle Douleur, Liz has been trapped for so long. In her newfound journey
with a younger man, she learns the freedom of loving and letting go, on her own terms, but also for the person she unconditionally loves.

Children of the River is a coming-of-age film that was inspired by the Marawi siege. Noel Comia Jr. plays the lead character Elias. He and and his three friends are trying to live a normal life, battling their own demons and taking care of their respective families while their fathers are away.

Their eagerness then turns into dread when they receive news about their fathers who are soldiers stationed in Mindanao. Elias and his three friends suddenly need to grow up and take on the responsibility their fathers left as they went away in a battle they can’t surely win.

A young boy named Edward is forced to live under the hospital bed of his ailing father. Estranged from his father Mario and his half-brother Renato, Edward treats the hospital ward his own playground, unmindful of the hopelessness that surrounds him. His careless attitude changes when he meets and becomes enamored with Agnes, a young patient in the hospital. Finding refuge and comfort in each other, Edward and Agnes bond and connect.

Ace (Royce Cabrera) and Miko (Kokoy de Santos) desperately want to become famous actors, but it seems like they are on the wrong path and the universe has a different plan for their lives.

Direk Eduardo Roy Jr. explained why he deliberately asked the two lead actors to remove the plaster that covered their private parts while they were doing the sex scenes for the movie.

After 40 years in the entertainment industry, Ruby Ruiz was chosen to be the lead actress in a full-length movie. In Iska, she is cast as a photocopier working at the University of the Philippines Diliman campus.

She works as a photocopier by day and a loving but impoverished grandmother of an autistic child. She wants to take her 10-year-old autistic grandson to a special needs orphanage, but she is accused of mistreating her grandson.

Her heart breaks when she is deemed unfit as a guardian by the media and the government.

The film revolves around John Denver Cabungcal, a Grade 8 student. All he really wants is to do well in school and get good grades to please his mother. One day, a classmate accuses him of stealing an
iPad worth P45,000. After the classmate’s persistent allegation, John Denver snaps and assaults his classmate. Unluckily for him, someone records the incident and posts the video on social media.

In just five days, this ordinary farmboy’s life is suddenly turned upside down.

Shot entirely in Pandan, Antique, this film is based on true events. John Denver Trending is a cautionary tale that bookmarks a period in our lives when we allow social media to reshape our mindset.

Malamaya takes the viewer on a sensual journey through the eyes of Nora, a 45-year-old unmarried visual artist (played by Sunshine Cruz) who is in an undefined relationship with a fellow artist named Jim (Raymond Bagatsing), a potter who is recovering from the death of his wife.

Nora’s dull and uninspired life takes a colorful turn when she pays a visit to the university where her friend Alice (Bernadette Allyson) teaches. Here, Nora meets Migs (Enzo Pineda), a young, up-and-coming photographer. The attraction between the two is instant. Visual artist and photographer then embark on a passionate love affair that ignites their respective lives and artistic endeavors.

A small-town midwife named Elena prepares for her job interview abroad. Unfortunately, she gets kidnapped by armed men.

How did she prepare for her role as a midwife? Iza revealed that she watched child birthing videos online.

After watching the birthing videos, Iza jokingly told her British husband Ben Wintle back then: "Sabi ko sa asawa ko, 'I don't know if I can give you a child."