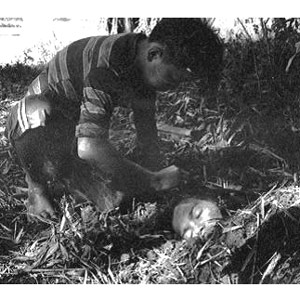 All screenings of Lav Diaz's films start at 1 p.m.

Lavrente Indico Diaz is a Filipino independent filmmaker who hails from the province of Maguindanao in Mindanao. He worked for a music magazine and experimented with both photography and writing before turning to filmmaking as a scriptwriter.

Lav Diaz was one of 13 directors who competed for the Artistic Innovation Award in the 2007 Toronto International Film Festival (TIFF). His latest film Kagadanan sa Banwaan ning Mga Engkanto (international title: Death in the Land of the Encantos) premiered in North America during the filmfest, which took place from September 6 - 15.

Synopsis by Steve Gravestock for the Toronto International Film Festival

Lav Diaz's epic, Evolution of a Filipino Family, examines 14 years of martial law that was imposed by then President Ferdinand Marcos. At the center of the movie is the Gallardo family, who eke out a marginal existence farming a dour strip of land. In their barrio, the imposition of martial law coincides with a wave of guerrilla activity and a rise in crime and general lawlessness. As their fortunes decline, the family begins to fall apart. One son, Ray, runs off following the rape and murder of his mother, the mentally challenged Gilda. Her brother, Kadyo, drifts into a life of crime and, after a harrowing term in prison, winds up living with low-lifes in Manila. On the whole, the women—led by no-nonsense grandmother Puring and her faith in tradition—fare somewhat better, remaining in the barrio.

Synopsis by Perry Seibert for the All Movie Guide

Lav Diaz's nine-hour drama Heremias stars Ronnie Lazaro as the title character. He is a traveling craftsman who, early in the film, decides to separate from the group of fellow merchants with whom he has been traveling. During his time alone, a vicious hurricane leaves him without his ox or any of his goods. As he wanders, he learns a great deal about the various people he meets on his travels. He eventually sees a group of drug-fueled teenagers who plan to rape a young woman. Although he attempts to tell several people about the plan, nobody listens. He eventually reaches an agreement with God that if he goes 40 days without food, the girl will not be harmed. Heremias is the first half of a two-part story.

The main character of Kagadanan is a Filipino poet named Benjamin Agusan (played by Roeder Camañag). He is the hapless native who returns to his hometown Padang to witness the aftermath of a super typhoon. Director Lav Diaz shot Kagadanan in Padang, Legazpi City, where a village was buried by landslides caused by super typhoon Reming that hit the Bicol region on November 30, 2006.

For the past seven years, Benjamin had been living in an old town called Kaluga in Russia. With his grant and residency, he taught and conducted workshops in a university. The poet published two books of sadness and longing in the process.

In Russia, Benjamin was able to shoot video collages, fell in love with a Slavic beauty, buried a son, and almost went mad. He came back home to bury his loved ones—father, mother, sister and a lover. He came back to face Mount Mayon, the raging beauty and muse of his youth. He came home to confront the country that he so loved and hated, the Philippines. He came back to die in the land of his birth. He wanders around the obliterated village meeting old friends and lovers.

Shot in black and white, Kagadanan sa Banwaan ning Mga Engkanto (Death in the Land of the Encantos) expresses an inexhaustible belief in the regenerative power of both nature and art.