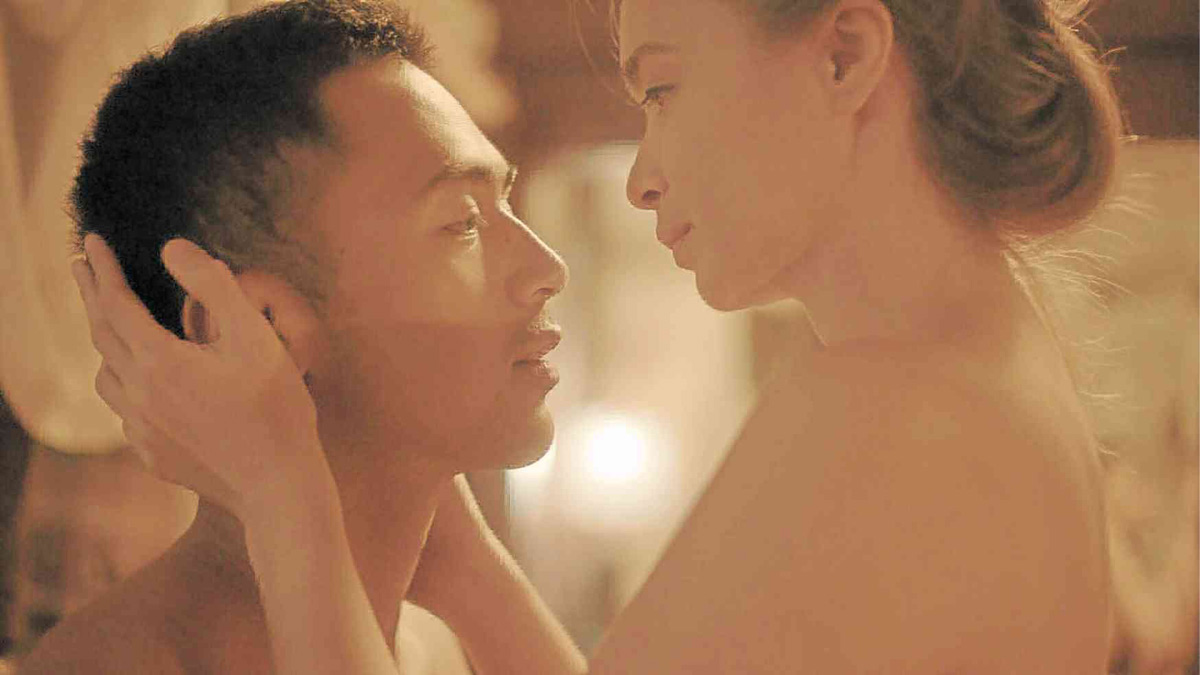 Sunshine Cruz and Enzo Pineda have a May-December affair in the Cinemalaya 2019 entry Malamaya.

Although she started her career as the girl next door type, it wasn’t until she decided to go daring and headlined a string of sexy films during the 1990s that Sunshine Cruz became a household name.

She gave up doing sexy films when she married actor Cesar Montano in 2000 although she continued to act sparingly in mostly supporting roles. Following the annulment of their marriage in 2013, Sunshine started to accept more acting projects, mostly for teleseryes.

This time, she headlines the Cinemalaya 2019 entry, Malamaya which is seen by not a few viewers as her return to doing sexy movies—given a “red band” teaser and poster that shows her lying naked while leading man Enzo Pineda sits on her behind.

In the movie, Sunshine plays Nora, a middle-aged visual artist who lives alone with her cat. The film starts with the sound of a man having sex. After the tryst, the woman who asks if the man is finished is revealed to be Sunshine while the man turns out to be Raymond Bagatsing. His character is Jim, a pottery instructor who has grown weary of her mood swings. They ended whatever relationship they had that same night.

As depicted in the film, Nora is the kind of artist whose quality of work is also reflective of her mood and inspiration. She takes her art seriously and personally, she does not sell any of her paintings and she has no patience for mediocrity.

After speaking before a class of over-inquisitive millennials, she meets Migs (played by Enzo Pineda), a budding photographer who calls himself a hobbyist. Despite her dismissive attitude, she becomes physically attracted to him and a passionate sexual encounter leads to him moving in with her.

That’s when his constant presence starts to encroach on her personal and work space.

In Malamaya, they were able to give a glimpse of the fascinating world of visual arts with no less than the works of 11 visual artists serving as backdrop.

As Nora, Sunshine gives her full commitment to the role and takes audiences to what makes this particular artist tick, her idiosyncrasies, neurotic tendencies, the method of her madness, so to speak and how obsessed she can be with her art when she finds the right inspiration.

At 42, Sunshine still looks incredibly sexy even though she did not (and did not have to) physically reveal more than what she needed to in her love scenes with Enzo. Given her age, Sunshine is likely to be offered more May-December vehicles but that’s okay as long as she has something fresh and different to offer like she did in this film.

For his part, Enzo provides just enough bratty charm to make Migs a convincing foil to Nora’s jaded persona. The young actor also manages to offer a glimpse of Migs’ wide-eyed enthusiasm both for Nora, who he has been pining for since he was a child and for his photography that he was beginning to consider as more than just a hobby.

Like most feature film debuts, Malamaya has its share of rookie mistakes, first and foremost of which is the way Nora and Migs are characterized.

Outside of the initial physical attraction between the two, there is nothing else that would justify seeing them in a prolonged relationship. For some reason not fully revealed in the film, the foul-mouthed and chain-smoking Nora thinks “all men are the same shit.” Hence, the more time they spend together, the more Migs rubs her the wrong way.

Nora also never saw Migs as her equal and it’s not just because of their age difference. Even though he is trying to show that he can be an artist himself, she doesn’t seem to be interested in seeing him grow.

Migs, on the other hand, doesn’t seem to realize that he can never impress someone with a strong sense of artistic sensibilities as Nora. And when he did something despicable that made her snap, all the more she just wanted him out of her life.

Audiences would have a far easier time rooting for this couple if either or both of them were portrayed in a more sympathetic light. It’s also hard to see the chemistry between the two leads when only one of them looks forward to having sex.

It would also help if Nora and Migs were at least madly in love with each other. Nora certainly wasn’t but even if Migs was, he still didn’t do enough to save their relationship when it started to fall apart.

It is also unclear how Nora makes her living since she doesn’t like selling her art. There’s a U.S.-based niece who calls her every now and then but it’s also not revealed if Nora receives remittance from her.

Production values are impressive enough but the filmmakers could have invested more on giving Nora the look of a visual artist rather than her mostly movie star appearance that makes it hard for audiences to separate the actress from the character she’s playing.

While Malamaya is a welcome return to form for Sunshine Cruz, Malamaya has either too much or too little going for it. To their credit, Chavez and Sta. Lucia may be onto something here as younger audiences who have yet to decide on a career path may be prompted to take a close look at the visual arts after watching this film.

Of course, the main reason why people will come to see this is to see how the May-December romance between Sunshine and Enzo would play out.

Let’s just say their relationship and the film as a whole could have played out in a more satisfying manner.