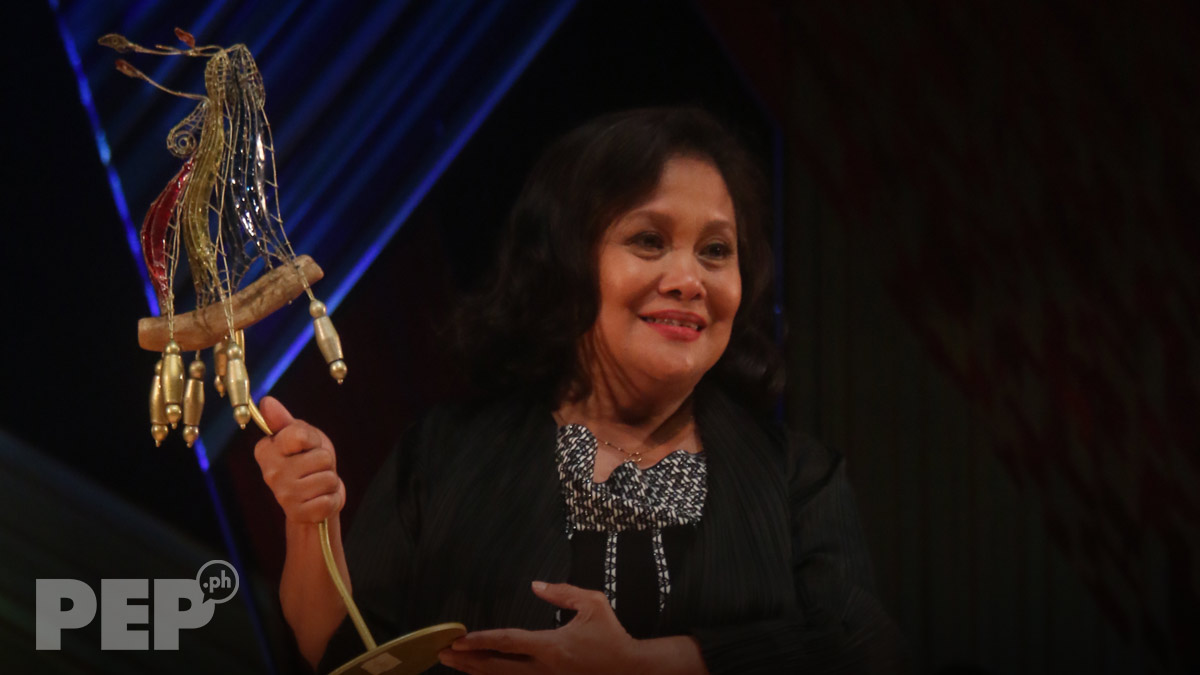 Ruby Ruiz was named the Cinemalaya 2019 Best Actress for the movie Iska wherein she played a doting grandmother to an autistic child.
PHOTO/S: Mark Atienza

Although she forgot to mention them in her acceptance speech, Cinemalaya 2019 Best Actress Ruby Ruiz said she is very grateful and honored to be in the company of Mylene Dizon, Iza Calzado, Meryll Soriano, and Sunshine Cruz in the 15th edition of the celebrated indie film festival.

“I know all of them. Mylene was very good, Meryll was very good, Iza was very good, I did not get to see Sunshine’s film but I know their caliber,” she told PEP.ph (Philippine Entertainment Portal) and other reporters following her Best Actress win.

Ruby won for Theodore Boborol’s Iska where she played a doting grandmother to an autistic child who had to deal with a series of unfortunate events.

The veteran actress added Mylene and Iza were particularly generous in heaping praises on her performance in Iska.

Asked what it’s like to win her second acting recognition from Cinemalaya, Ruby recalls that the feeling is much different compared to the first time she won as Best Supporting Actress for Jeffrey Jeturian’s Ekstra in 2013.

“Nung nanalo ako for Ekstra, I was completely clueless. Nagulat na lang ako nung tinawag ang pangalan ko. I did not expect to win, let alone be considered,” she recalled.

Overwhelmed with gratitude, she also pointed to the Philippine Educational Theater Association or PETA as having honed her to become the actress that she is today.

While initially identified with theater, Ruby has carved a distinguished career in film and television. Not too many may be aware of it but she is in the cast of just about every film directed by renowned filmmaker Brillante Mendoza including Kinatay, Thy Womb, Taklub and Ma’ Rosa where she and the rest of the film’s cast were nominated for Best Ensemble Performance at the Young Critics’ Circle award in 2017.

Ruby also had a small role in the Hollywood blockbuster, The Bourne Legacy that was partly shot in Manila in 2011 and released in 2012.

After winning in Cinemalaya 2013 for Ekstra which also garnered her nominations from the Gawad Urian, Star Awards for Movies and the Golden Screen Awards, Ruby continued to be cast in supporting and sometimes even cameo roles.

In Cinemalaya 2019, she is also in the cast of Belle Douleur and F#*@ BOIS (formerly known as Fuccbois).

Ruby already considered herself a winner when she was cast in the lead role of Iska after spending decades in the entertainment scene.

What made her casting all the more sweeter for her was the fact that she did not leave a first good impression with her director when they first worked together on the TV remake of the classic soap Annaliza in 2013.

To prepare for the film, Ruby said the cast and crew visited several schools for autism to better understand what it’s like to care for patients, especially children, who are afflicted with the disorder. For her part, she also visited the person that inspired the film, the real Iska herself in her home, and got to know her better.