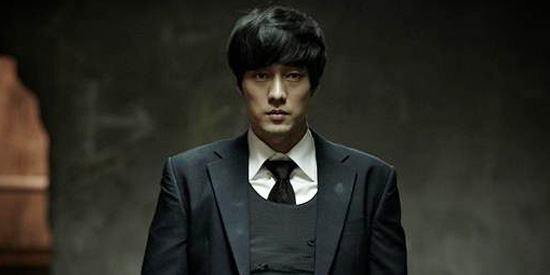 So Ji-sub topbills the movie Company Man, which is included in the Manila leg of the 2014 Korean Film Festival.

The Korean Cultural Center in the Philippines (KCC) and the Embassy of the Republic of Korea are featuring seven films for the Korean Film Festival this October, in cooperation with the Film Development Council of the Philippines (FDCP), the Film Cultural Exchange Program, Korea Copyright Commission, Korea Tourism Organization, SM Cinema and SM Lifestyle Entertainment, Inc.

The Korean film festival is ongoing at SM Megamall until October 12, 2014. Admission is free.

SO Ji-sub’s action-thriller Company Man leads this year’s roster of films with varied genre, as well as the thriller films Hide and Seek, Hwayi, and King of Pigs.

The romantic comedy All about My Wife, and dramas Man on the Edge and My Paparotti complete the film list for the 2014 Korean Film Festival.

The movie Company Man (회사원) tells the story of Hyeong-do (SO Ji-sub), an assassin who regards his work as a routine. A contract killing organization is managed like a normal company and Hyeong-do works for this organization. A man loyal to his company and accepted as the firm’s best killer, Hyeong-do one day starts feeling doubts about his job and decides to quit it for a woman he is in love with. Instantly, he is under threat of being hunted down by his former colleagues.

SON Hyun-joo stars in Hide and Seek (숨바꼭질) as the OCD insomniac Sung-soo whose brother has gone missing. He sets out to find him, only to discover that the shabby half empty apartment complex that Sung-soo’s brother used to live in has strange symbols inscribed under the door bells: □, ○, △, V. The residents look terrified, hurriedly locking themselves when Sung-soo and his family arrive at the apartment. Ever since they returned home from the trip, strange things start to happen. His house keys disappear, someone tries to break in when only his children are at home. Then the engravings under his doorbell appear: □1, ○1, △2. With his family quivering in fear, Sung-soo’s compulsiveness and nightmares get worse.

For the film Hwayi (화이 : 괴물을 삼킨 아이), child star Yeo Jin-goo was voted as the Best New Actor in the 33rd Korean Association of Film Critics Awards and the 34th Blue Dragon Film Awards in 2013. YEO Jin-goo plays the titular role of Hwayi, raised by 5 fathers who are famous criminals. One day, the group is commissioned to kill a man named Lim and his wife. While the rest of the group feel something odd about this particular contract, Suk-tae is adamant to carry out this job with Hwayi in tow. During the job, Hwayi discovers a photograph of a child in Lim’s house. Eventually, Suk-tae hands his gun to Hwayi and he is forced to pull the trigger. He becomes ill after committing his first kill, and realizes that the boy in the photograph looks uncannily familiar.

The award-winning animated film King of Pigs (돼지의 왕) tackles the issue of bullying. Kyung-min, a businessman, and Jong-suk, a failed writer, are former schoolmates. During a reunion dinner they look back on their school days, when a particularly cruel group of students, “the dogs”, exercised a reign of terror by hazing and bullying part of the other students, the “pigs”. One day, KIM Chul, one of their mates, stood up to the “dogs”, becoming the only hope of ending their tyranny. Fifteen years on, he remains a hero. But behind this figure, the two men recall the murky story of their bond.

IM Soo-jung and LEE Sun-kyun star as a married couple in All About My Wife (내 아내의 모든 것), the only romantic comedy film in the festival. Doo-hyun’s (LEE) wife Jung-in (LIM) is the complete package--a beautiful woman and excellent cook--but he simply cannot stand her endless nagging and complaining. Doo-hyun chances upon a way out of this relationship when his company finally transfers him to another province. However, much to his dismay, Jung-in secretly moves into the house to be with him day and night. But when Doo-hyun sees his new neighbor Sung-gi (RYU) being chased by adoring women day in and day out, he hatches a new scheme, asking Sung-gi to seduce Jung-in. Confident as ever, Sung-gi begins his new conquest, not knowing what Jung-in has in store for him.

The drama-comedy Man on the Edge (박수건달) is a story about Kwang-ho (PARK Shin-hyang), a famous mob in town, where strange things begin to happen after he is stabbed in the hand during a fight. He concludes that the path of a shaman is the only solution to his problems, and juggles his vocation as a mob by night and his new role as a shaman by day. He's now known as "veiled shaman" and even ghosts visit him for help. While Kwang-ho leads a dangerous double life, he begins to sympathize with a child ghost named Su-min. When Kwang-ho is about to help Su-min, his cover is blown and is attacked by a rival gang. Will Kwang-ho be able to fulfill Su-min's wish?

A music-themed drama film, My Paparotti (파파로티) tells of the story of a local teen gangster with musical dreams (LEE Je-hoon) and the once-promising music prodigy turned local teacher Sang-jin (HAN Suk-kyu) as they work together towards fulfilling each other’s dreams. ang-jin was a promising young singer who now works as a high school music teacher after suffering from vocal cord tumor. His ordinary life is suddenly rattled when Jang-ho, a local teen hooligan is transferred to his school. Jang-ho is a constant source of headache, but upon hearing Kang-ho’s singing voice, he realizes the boy’s pure talent and decides to help develop it. Just as the two grow their special bond, unexcepted conflict arises between two rival gangs, which propels Jang-ho into a crisis. Will Jang-ho overcome the obstacles and fulfill his destiny as a world-class singer?