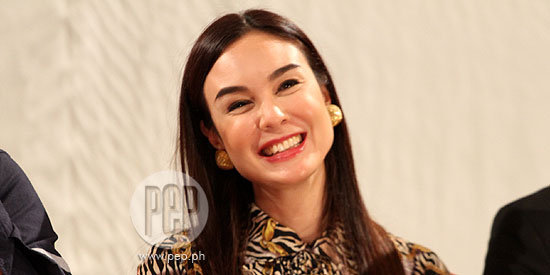 “Talagang one of my ultimate dreams is to work with John Lloyd because I watch his movies. I believe in his talent," said Gretchen Barretto during the presscon of The Trial held last night, October 2.

“This is the heaviest drama movie that I’ve ever done,” said Gretchen Barretto when asked about Star Cinema's latest movie offering, The Trial.

She plays the role of a developmental psychologist, who is determined to help John Lloyd Cruz’s character prove his innocence in a rape case.

At the presscon of The Trial held last night, October 2, Gretchen shared that she feels fortunate to be part of a project that challenged her to be the best at her craft.

But more than anything else, Gretchen, 44, revealed that she’s thrilled with the fact that the movie gave her the opportunity to work with John Lloyd, 31.

“Talagang one of my ultimate dreams is to work with John Lloyd because I watch his movies.

“I believe in his talent. More than that, I really am the biggest fan of John Lloyd.

Given a chance, Gretchen gushed that she would love to work again with the three-time Box Office King of Philippine cinema.

As it is, they were so focused on their respective characters that they didn’t really have the chance to bond off cam.

The Trial is also a reunion project of sorts for Gretchen and Richard Gomez who previously worked in movies such as Lumayo Ka Man Sa Akin (1992) and Paalam… Bukas Ang Kasal Ko (1986).

It was so long ago that Gretchen admittedly can’t remember the plot of their first movie together. Richard, on the other hand, still vividly remembers a scene where La Greta showed off her sexy body.

On a serious note, Gretchen observed that she and Richard have both grown more mature in terms of their craft.

“The difference is I see now that we have both matured as an actor.

The 44-year-old actress also expressed her gratitude for Direk Chito Roño, who kept her on her toes throughout the shooting of the movie.

“In the beginning, parang I felt ‘Oh my God! Nakakakot!’

At the end of the presscon, Gretchen related that they shot the most difficult part of the movie during their last shooting day.