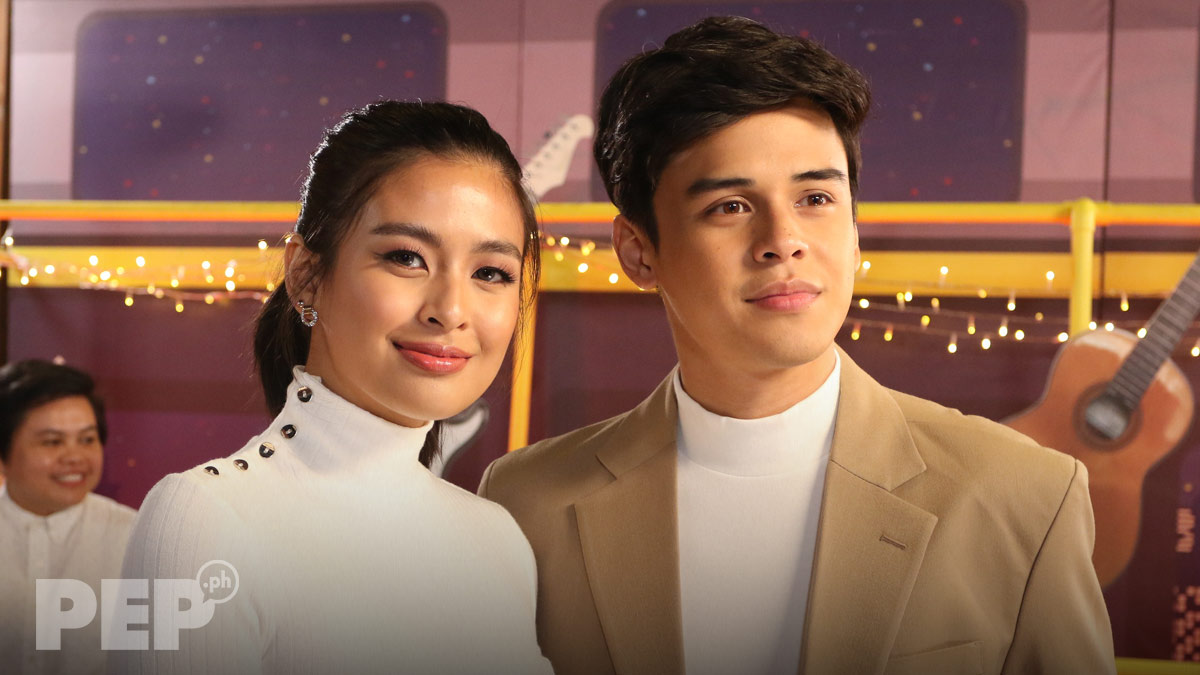 Khalil Ramos (right) on working with girlfriend Gabbi Garcia: “It was a thrill to work with her."
PHOTO/S: Noel Orsal

ABS-CBN actor Khalil Ramos has no issue with his girlfriend Gabbi Garcia being a GMA-7 actress.

“Mas mabuti na we’re in different networks,” he said. “We don’t really want work to be part of, like, integrating into the relationship.”

He added, though, that working together in a movie is fine with them.

Khalil and Gabbi star in the Jade Castro-directed movie LSS (Last Song Syndrome), an entry to the 2019 edition of Pista ng Pelikulang Pilipino (PPP), which runs from September 13 to 19 in cinemas nationwide.

“It’s called LSS because the two main characters, they’re connected through a song by Ben & Ben,” he said, referring to the popular indie folk/pop band.

LSS stands for last song syndrome, which occurs when a person can’t help singing the last song he or she has heard.

Khalil recalled having a great experience working with Gabbi for the first time.

“It was a thrill to work with her,” he said. “No’ng una, medyo nangapa kami, surprisingly, though, we’re comfortable with each other.

He added that they’ve “known each other for a long time.” But they haven’t seen each other at work, so they didn’t know if they had chemistry onscreen.

“So it was a good learning experience,” he pointed out. “Madami kaming natutunan sa isa’t-isa.”

In July 2018, the couple publicly admitted that they were dating.

In a video posted on Gabbi’s YouTube channel in July 2019, they recounted that they first met at the debut party of Gabbi’s friend Julia Barretto, who’s a Kapamilya star like Khalil.

That was in 2015, and they didn’t hear from each other until two years later, when Gabbi texted Khalil about the movie he was starring in at that time, 2 Cool 2 Be 4Gotten.

They’ve never stopped communicating since then.

They also revealed in the video that they’ve been a couple for two years.

In this exclusive interview, Khalil said that having a close relationship with his girlfriend helped a lot in making the movie.

“Siyempre, naging sobrang advantage na we’re very much comfortable with each other,” he said.

Still, he said, they made it a point to separate work from their private life, so they were able to focus on playing their characters.

If there’s one song that best describes him, Khalil said it would be "Closer to the Edge" by Thirty Seconds to Mars.

He took a moment to think about the song that best describes Gabbi before picking "Lick Her" by Jaxon Rose.

As for the song that’s recently been giving him LSS, Khalil said it’s "Pagtingin" by Ben & Ben.

LSS is one of the entries of the 2019 Pista ng Pelikulang Pilipino. No Hollywood or foreign films will be screened in cinemas nationwide from September 13 to 19 to make way for the PPP 2019 entries.