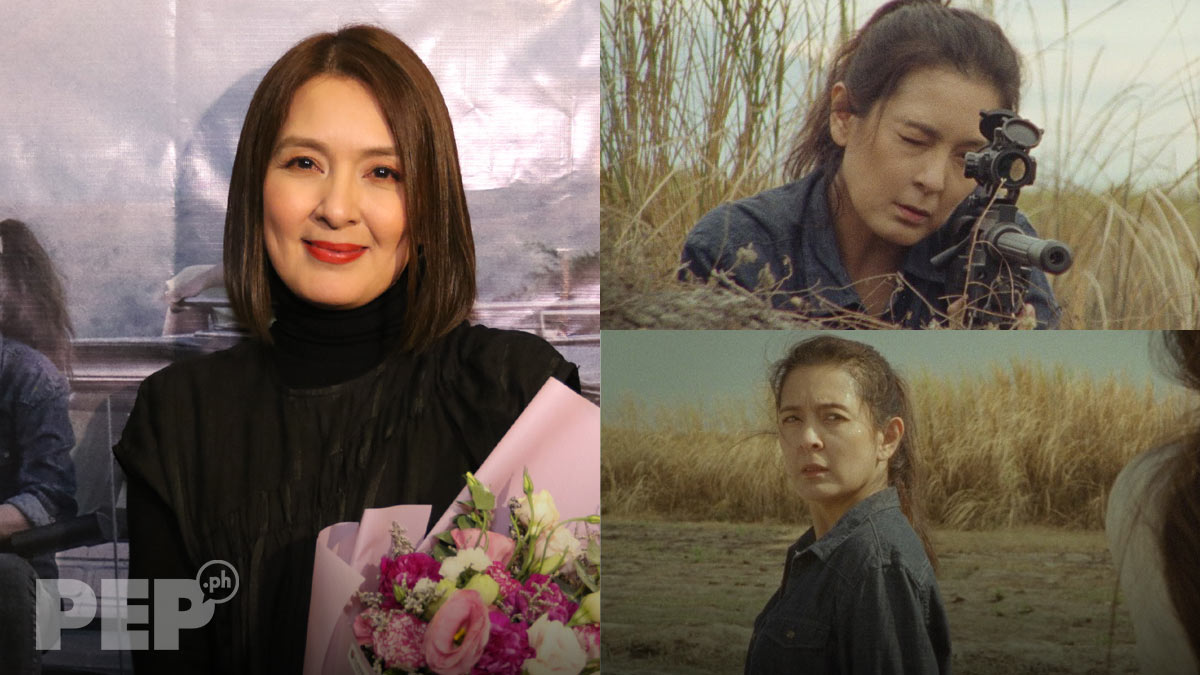 Before Jean Garcia (in photo) was chosen to top-bill Watch Me Kill, there were other actresses who were considered to play the assassin role.
PHOTO/S: Noel Orsal

Jean Garcia was not the first choice to play the assassin in the movie Watch Me Kill.

There were other actresses considered to top-bill the 2019 Pista ng Pelikulang Pilipino entry that ended up winning Best Director for Tyrone Acierto, Best Cinematography, and Best Editing.

This was revealed by Direk Tyrone Acierto in an exclusive interview with PEP.ph (Philippine Entertainment Portal).

"Eula Valdes was actually one of them.

"I don't even recognize the character that I wrote in the screenplay anymore.

"She's perfect for the role and I wouldn't change anything. Luciana is Jean Garcia."

The GMA-7 actress is aware of this fact as she admitted, "Hindi lang naman ako yung kinonsider ni Direk Ty for the movie."

In Watch Me Kill, she brings life to Luciana, a female killer-for-hire, she leaves no witnesses behind. She's fierce, cold and calculating.

In this psychological action-drama thriller, Luciana (played by Jean Garcia) is in the middle of a kill when she finds out that her target is in the company of a young girl.

When the killer finally completes her mission, she lets the girl flee but eventually takes her in and watches over her. As she takes on killing jobs with the little girl in tow, the assassin begins to question her purpose.

During the general press conference of Watch Me Kill, Direk Tyrone disclosed that he initially wanted the lead character to be male.

However, he changed his film. He explained:

"The first couple of pages of the screenplay that I was writing, originally the lead character was a male character. The screenplay wasn't going anywhere. If I were to write about a male hired contract killer, the viewers might as well watch another Steven Seagal film.

"I thought maybe it's the right time to have another female lead character in an action thriller film.

"And what could be better than featuring a Filipina female lead character in a drama such as this?"

To prepare for her role, Jean narrated: "We underwent intensive training under the International Krav Maga Federation. We got the director of Krav Maga Philippines na i-train ako.

She disclosed that the person who trained her here in the Philippines was the same guy who coached Keanu Reeves in his Hollywood film.

Did Direk Tyrone really envision casting someone as mature as Jean who is now 50 years old?

"Yes, I wanted someone who was in the twilight of her career who lost everything she had and missing out in life."

What were the difficulties that she encountered while shooting this PPP 2019 entry?

"We started rehearsing at 6 in the morning and finished at 4:35 PM then we did the scene in two takes lang."

When asked if she got injured while shooting Watch Me Kill, Jean narrated:

Watch Me Kill is graded B by the Cinema Evaluation Board. This is an excerpt from the comments given by the CEB:

"The other production elements are above standard. The cinematography is excellent. The production design, editing, and sound are functional.

"The reviewers present are unanimous in citing Jean Garcia in her fine performance.

"The supporting actors, like Junyka Sigrid Santarin as the girl Aurora and Jay Manalo as the head gangster Franco, achieve credible performances, too."

Tyrone Acierto was born and raised in the Philippines. He graduated from Columbia College Chicago.

He opted to shoot Watch Me Kill on Super 16mm film because he believes "there’s a certain texture that cannot be duplicated when shooting film versus digital."

Watch Me Kill is the only Filipino film invited to the 2019 Warsaw International Film Festival to be held in Poland on October 11.