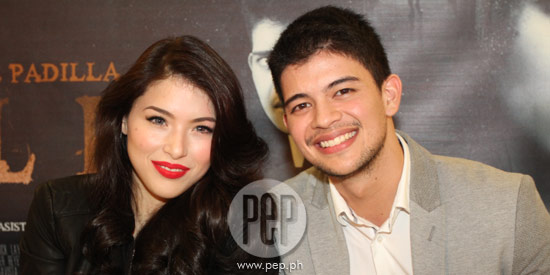 Kylie Padilla and Rayver Cruz say their closeness is not for the promotion of their upoming movie Dilim.

The GMA-7 actress and ABS-CBN actor built their friendship while doing the suspense-thriller movie of director Joey Reyes under Regal Films.


He also pointed out that he and his previous girlfriend, Cristine Reyes, developed a romantic relationship when they became close to each other: "Friendship talaga ang the best kasi maganda 'pag naging girlfriend mo, best friend mo rin siya."


What does Kylie like about Rayver? “He’s a gentleman. Walang masyadong ego saka [hindi niya iniisip] yung image niya. I like that.”

During the movie press conference, Regal matriarch Lily Monteverde said she personally suggested Kylie and Rayver to be in a movie because they simply good together.

Rayver said almost the same thing about their onscreen partnership.


Is Kylie ready to accept suitors and fall in love again after the tumultuous end to her relationship with Aljur Abrenica?

At this point, Kylie turned to Rayver and asked him: “Worth it ka ba?”

ENCOUNTER WITH GHOST. Dilim depicts the story of a girl who has a third eye, allowing her to see supernatural entities.

Kylie adds that her character Maritess is able to see ghosts even during daytime.

PLOT. In Dilim, Kylie is cast as Maritess, a provincial lass who moves to study Nursing in the city. She meets Damian, the caretaker of a dormitory in the university belt where she chooses to stay in Manila.

Alone with no fellow boarders around, Maritess experiences odd things she never experienced while staying in the dorm.

While Damian is on vacation, a nursing student named Mia (Ella Cruz), suddenly joins Maritess in the dorm. Mia is so mysterious that she starts to scare Maritess out of her wits.

This goes on for days until Maritess begins to try to figure out Mia's connection to the nightmares she's been having.

Maritess finds the answer she needs through another Nursing student, Aya, who tells her about Mia's sudden disappearance five years ago.

With the help of Emerson (Rayver Cruz), a part-time student/employee at a neighboring Internet shop, they uncover the secret behind Mia and Aya's disappearance, unaware that their discovery would put their lives in danger.

Discover the mystery surrounding the movie Dilim that brought Rayver and Kylie closer when it hits the big screen on October 22.