Will Sarah Geronimo have a cameo in Matteo Guidicelli's movie? 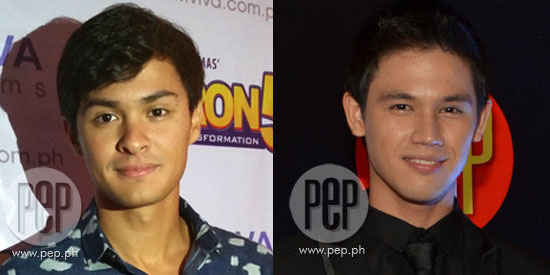 Matteo Guidicelli admits he got bullied on the set of Moron 5.2 The Transformation.
Since he is the new addition to this comedy film, he is often the target of pranks done by his co-stars Luis Manzano, Billy Crawford, Marvin Agustin, DJ Durano and John “Sweet” Lapus.
When Matteo Guidicelli was asked if he ever got angry because of the bullying, he deadpanned, "Minsan lang."
He laughed and took back his statement, "Hindi biro lang. Ako yung pinakabata sa set. They bully me all the time. Fun lang naman lahat."
In a separate interview with PEP (Philippine Entertainment Portal), Matteo said about his role in the movie, "We're five superheroes. My character thinks he can fly but you'll see what will happen in the movie."
How did he adjust to being the new addition considering that the others already bonded while doing the first installment titled Moron 5 and the Crying Lady?
"Of course, it was scary and intimidating at first but they made me feel very welcome."
Luis Manzano, Billy Crawford, Marvin Agustin, and DJ Durano reprise their roles as Albert, Isaac, Aris. This time, they already have wives and kids.
Luis is paired with Yam Concepcion, Billy has Danita Paner, Marvin has Nikki Valdez while DJ is paired with Mylene Dizon.
Does Matteo have his own leading lady in the film?
"Yes I do, pero surprise na yun," he said with a smile.
"Yung iba meron nang mga asawa. May love interest ako dito, sobra siyang maganda at sobra siyang sexy. Sobra akong excited para sa inyong lahat."
Will his girlfriend, Sarah Geronimo, serve as his leading lady in Moron 5.2?
"We'll see," said Matteo with a laugh.


Three weeks ago, Matteo posted a photo of himself with Sarah and provided this caption: "My perfect imperfection."

In the film, Matteo took over the part of Michael Angelo (or Mike) previously played in the original Moron 5 movie by Mart Escudero.
Set at least five years after the events from the first movie, the half-witted longtime friends are now family men with talented and intelligent children who are ashamed of them.
WHY MARTIN ESCUDERO GOT REPLACED. During the press conference of the movie, director Wenn Deramas broke his silence about the reason why Martin Escudero got replaced by Matteo in the sequel of Moron 5.

It will be recalled that Martin was part of the first installment entitled Moron 5 and The Crying Lady together with Luis, Billy, Marvin, and DJ back in 2012.

Given a choice, Direk Wenn maintained that he would have preferred it if both Matteo and Martin could join the cast of Moron 5.2.

Unfortunately, a decision had to be made and only one gets to be part of the project.

Under the circumstances, Direk Wenn vowed to tap Martin for future projects.

Matteo, for his part, clarified that there is no ill will between him and Martin because of what happened.

“I know Martin. I’ve worked with him on GMA [Network] before for a month. He's a really cool dude.

“Basta, I’m just so blessed to be in the project. They tease me all the time. Pero wala naman,” Matteo stated.