MOVIE REVIEW: John Lloyd Cruz gives one of his finest performances as mentally handicapped guy in The Trial 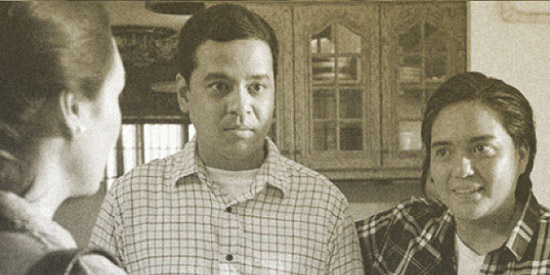 In the film The Trial, Ronald (portrayed by John Lloyd Cruz, middle) is a confusing mix of man and child. His biological mother is portrayed by Sylvia Sanchez (right) who is a lesbian.

We do not expect something like The Trial to come out of Star Cinema’s movie mill but here it is: an odd offering among light-hearted romantic comedies and mistress melodramas.

But even this gamble of a project did not quite escape the melodrama pit with its extraordinary coincidences and run-of-the mill tragedies although it did strive to be so much more.

Twenty-seven-year-old Ronald (John Lloyd Cruz), a mentally handicapped high school student, is accused of raping his teacher Bessy (Jessy Mendiola) whose aunt (Vivian Velez) owns the school. When her family sues Ronald to salvage the school’s reputation, Ronald and his family of meager means is pushed against the wall with slim chances of fighting back in a legal battle.

Ronald hails from a non-traditional family composed of his biological mother who is a lesbian (played by Sylvia Sanchez) and openly gay father (played by Vince de Jesus).

Bessy’s aunt builds up the case against Ronald by enlisting the help of her niece’s godmother, Amanda (Gretchen Barretto), a developmental psychologist, to prove that Ronald is within the right frame of mind to commit the crime. But when Amanda discovers the connection between Ronald and her neglected son Martin (Enrique Gil), she turns the tables and convinces her lawyer husband Julian (Richard Gomez) to take on Ronald’s case even if only to make it up to Martin.

Setting aside the amazing coincidence and the irrational desire to assuage the guilt of absentee parenting by paying forward a debt to a child, the film did manage to regain control by making small details count amid the overall hysteria and give the film unpredictability.

The Trial gives us flesh and blood characters whose imperfections both discredit and dignify them, giving the story greater dimension.

Ronald is a confusing mix of man and child. As a charity student in his high school, he works as a gardener, meticulously taking care of the school gardens and cherishing his bond with Bessy in the early stage of their friendship. He keeps a clean garden shed but litters his locker with pictures of naked women. Before he comes home, he drops by a comedy bar where he trades lewd banter with the other mainstays and occasionally borrows pornography.

Bessy, a model teacher on the outsider, is no saint either. Insecure of her talents as an educator, she takes refuge in her friendship with Ronald but tolerates an abusive relationship with a boyfriend (played by Benjamin Alves) whom she believes she could get used to.

Did Ronald and Bessy have love between them? Or were the smiles and kind words exchanged in the school garden shed one afternoon just an image in Ronald’s faulty mind?

The mind and heart of a child has always been a terrible and fertile ground for film for it is totally pure and cruel.

As Ronald stands trial, Amanda and Julian stand in a trial of their own. Their marriage is on the brink of collapse. Will doing one last good deed for their child save it? Or will it just give them the closure needed to move forward with their lives?

The Trial also boasts of a stellar cast whose talents are pushed to the limit.

Here we see John Lloyd Cruz at one of his finest, his Ronald being the perfect mix of hard and soft, fight and fright. Jessy Mendiola’s Bessy, meanwhile, is convincing and relatable, inspiring both hate and pity.

What a gamble it must have been for Star Cinema to pour in resources in a film touching on matters that are usually not palatable to ordinary moviegoers: rape without titillation, the intricacies of the Philippine justice system, the family unit in the changing times.

The film crams so much issues in the two-hour screen time and has so many shades of grey that it does require a tad bit more patience from the average viewer. Nonetheless, The Trial maintains an easy enough pacing to transition the average viewer towards the end without feeling overly burdened.

In the end, it is a festival-worthy piece that may usher in a new age for mainstream Philippine cinema.