MOVIE REVIEW: Little Azkals is a simple yet powerful documentary that football and non-football fans will appreciate 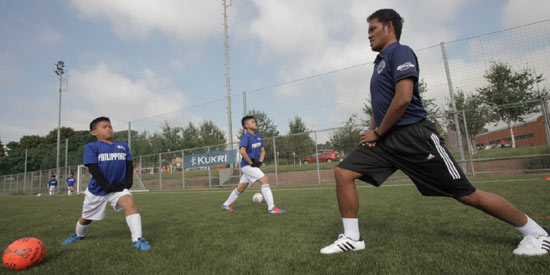 Little Azkals is a documentary that follows the journey of young boys as they are molded into champion Filipino football players.

Little Azkals is a film that documents the elite football training twenty-two boys from different parts of the Philippines went through at UK’s Loughborough University.

The boys, aged 10 to 11 years old, were chosen by the Philippine Football Federation (PFF) from more than a thousand hopefuls to be part of the Little Azkals Under 11 Team.

The British Council sent the Little Azkals to train for three weeks in the United Kingdom, the country where football was developed, to assist in the Philippine Football Federation’s goal of preparing the Little Azkals team to qualify for the Fifa Under-17 World Cup in 2019.

The film, Little Azkals, is the first of a would-be series that will follow the boys’ growth until they achieve their World Cup dreams and eventually compete at the 2024 Olympics.

Director Baby Ruth Villarama is behind the 2013 documentary Jazz In Love, which was the opening film of the 9th Cinemalaya Philippine Independent Film Festival. She is assisted by film editor Chuck Gutierrez and creative mentor Clodualdo del Mundo Jr. in presenting the challenges the entire Little Azkals team went through during their training in the United Kingdom.

Villarama’s own creative team sifted through hours of footage to provide viewers an inspiring, funny and heartwarming movie that football and non-football fans can easily enjoy and relate with.

The film’s simplicity is its power. It gives audiences an intimate experience that makes it seems that the boys are our own family members or that we too are a part of the team.

See the boys and their coaches adapt to the football style, culture, cold weather and language of the United Kingdom. The boys also had to deal with homesickness and the apparent “blandness” of English food.

Moviegoers will find the boys’ fascination with their icy smoky breaths endearing. The boys’ search for rice in a predominantly potato-eating country, their penchant for showering their English food with plenty of salt and the team’s “nosebleed” moments when speaking in English are all 100% relatable.

Their battle with the U-11 Leicester and Quorn teams remind audiences that these ordinary kids are doing their best to excel in this sport for the pride of the country.

Their loneliness of being away from their loved ones and their initial thrill of being in a new environment makes it impossible to not want and wish the best for the entire Little Azkals and their football dreams.

The three-week U.K. training seems relatively brief to make a lasting impact. Could the team be given an additional week of training?

The film Little Azkals similarly leaves viewers wanting for more. The movie abruptly ends when the team goes back home and one of the boys is seen leading his usual life.

How did the training change the team’s perspective and actual game play? The movie seems an introduction to a second film that will answer these questions.

Little Azkals is a documentary that aims to simply present the events as they are while also giving hints of the potential of the country’s young football team.

What will happen next to the team, just like life, is impossible to know: it has to be experienced. Watch Little Azkals if you want to experience being part of the country’s future football pride.

Little Azkals will be shown on October 25 and 26 at select SM Cinemas.