Nadine Lustre reveals what she finds special about James Reid 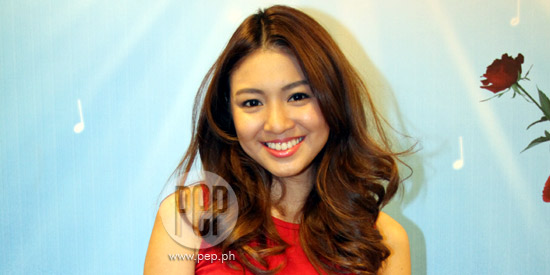 Nadine Lustre reveals that her dream role is to star in an action movie similar to projects done by Angelina Jolie in the past.

Nadine Lustre is hardly missing a beat, bagging endorsements left and right, launching and promoting an album, and working on a mini-series for ABS-CBN.

The 20-year-old actress shot to fame via the 2014 movie Diary ng Panget and her star hasn't stopped rising.

PEP.ph recently caught up with her during the October 17 celebrity gala premiere night of The Best of Me hosted by Viva International Pictures.

A self-confessed Nicholas Sparks fan, Nadine says the The Vow is her favorite among his many novels.

While she didn't write any of the songs on her self-titled EP album--they are all originals written by the likes of fellow Viva artists Thyro and Yumi--she points out: "sobrang hands-on ako, kahit nung ginagawa pa lang namin, sobrang excited na ako lumabas siya. Even the songs, I'm so excited to hear all of them."

NEW MOVIES FOR JADINE. Nadine and James, more popularly known as the JaDine love team, will be featured on the big screen once again.

They are slated to film Never Talk Back to a Gangster, which is the sequel to their previous movie Talk Back and You’re Dead.

Does Nadine feel overwhelmed with everything that is happening?

She is excited with what Never Talk Back to a Gangster holds for her and the characters we have come to know, love and hate over the past two movies.

TYPECAST IN ROM-COMS? How does she take the fact that it seems like she is being typecast into a certain mold of actress, of the romantic comedy variety?

But if she were given a chance to do something else, she shares that action is definitely something that interests her.

We ask her if she has a sport to complement that desire. She revealed: "boxing before but now since I'm busy I don't even have time to go to the gym anymore when I get time, talagang rest na lang."


ON BEING COMPARED TO KATHRYN BERNARDO. We bring up the constant comparison Nadine Lustre and onscreen partner James Reid get to the power couple KathNiel, comprised of Kathryn Bernardo and Daniel Padilla.

While she has already attended events where both members of KathNiel have been present, Nadine has yet to personally meet Kathryn Bernardo.

ON WORKING WITH JAMES. What is the secret to their love team success?

Nadine describes their time together, "we see each other most of the time, with the scheds and all, we're really close unlike before na may awkwardness pa.

But when pressed on what makes the two of them together click, so much so that even their taping days would go on trending in Twitter, Nadine shrugs and shares, "to be honest, I really don't know. Just being ourselves? I really don't know. Yung nga, that's what's funny nga na every time tinatanong nila kami, kung paano kami nagkaroon ng ganoon ka lakas na chemistry, di rin namin alam, we're just doing our job.


What does she appreciate most about the heartthrob known as James Reid?

She relates something she found cute that James did for her,"special siya sa akin, while we were waiting for our scene [in ABS-CBN's mini-series My App Boyfie], habang nakastandby kami, nagpapatawa siya tapos I was holding this flower na may pot na may orchid, he's trying to bite," she trails off into small laughter.

She says that the James people see is quite different from the one she experiences, and with that she is happy knowing James is letting her be a part of his life.

In fact, she knows and admits that James is such a big factor in making her the star that she is now. "True din naman, yung breakout movie namin, DNP, siya kasama ko, e."

Could she consider James as something more in the future and does she see their love team growing stronger still?

How would she describe their relationship? She smiles mysteriously, before answering: "partners in crime."

Has she thought of working with anyone else?

"Aside from James... siyempre James pa rin, I haven't thought of that yet."

She might consider a spin-off pairing of her and Joseph Marco because, "in a way mayroon na kaming na build up na chemistry, iba rin and siempre if you've watched the movie medyo nakakabigla yung secret ending, may nabuo na rin na chemistry so it's not hard for me."

She does lament that with her schedule right now, there is no time for love. "Definitely wala.