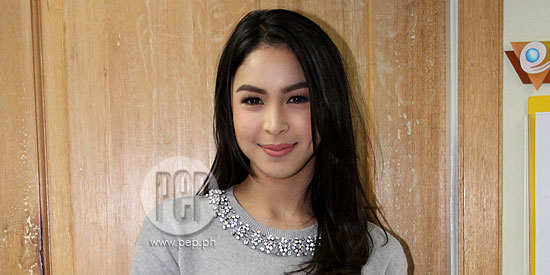 Julia Barretto is paired with Iñigo Pascual for Para Sa Hopeless Romantic, the movie adaptation of a best-selling book by Marcelo Santos III.

Julia Barretto refuted speculations about possible rivalry with Nadine Lustre as they are slated to work with each other in Para Sa Hopeless Romantic.


Produced by Viva Films, this is a movie adaptation of a best-selling book by Marcelo Santos III.

Julia is paired for the first time with Iñigo Pascual, while Nadine is teamed up with perennial leading man James Reid.

“No, no, no, no! Everybody’s our friends. Lahat ng success nila natutuwa kami for them.

The daughter of Marjorie Barretto is confident that she and Iñigo won’t have a hard time establishing onscreen chemistry since they get along really well off cam.

The Kapamilya actress recalled that she met Iñigo when he accompanied his dad Piolo during a contract signing held at ABS-CBN.

“I had my contract signing and so did his dad. Dun ko siya [Iñigo] unang na-meet and we were able to talk. Parang nagkasundo kami agad doon.

“So, nung finally bumalik siya and we were talking about the projects that we’re gonna do together mas nagkasundo kami.

Asked about her role in Para Sa Hopeless Romantic, Julia shared that it’s far from what she did for her now defunct teleserye Mirabella.

But more than anything else, Julia's just thrilled to be doing her first film throughout her career in showbiz.