Is there a chance for Iñigo Pascual to fall for Julia Barretto? 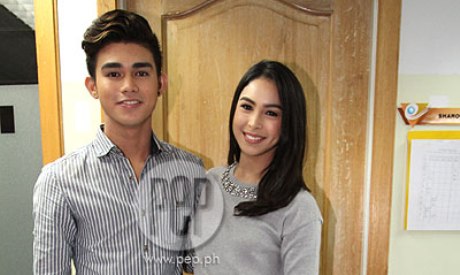 "Actually, at first I didn’t know how to talk to her. Pero once you talk to her, she's very simple, and very light and fun and chill to talk to," says Iñigo Pascual when asked about his first initial impression of Julia Barretto.

While Iñigo Pascual finds Julia Barretto really attractive, the 17-year-old maintains that being romantically linked to his leading lady is not his priority.

“We can’t answer that right now. We still need to get to know each other,” said Iñigo when asked if there’s a chance for him to fall for someone like Julia.

“Right now it’s not something we need to focus on since we’re both young. For now I think we should focus on education and career.”

Although it’s the first time they will be working with each other, Iñigo and Julia seem to get along really well during the story conference/pocket presscon for the said romantic-comedy film.

Asked about his first impression of Julia, Iñigo admitted that he was a bit hesitant to approach the former Mirabella star.

They met when Iñigo accompanied his dad Piolo Pascual at a contract signing in ABS-CBN last August.

“Actually, at first I didn’t know how to talk to her. Pero once you talk to her, she's very simple, and very light and fun and chill to talk to.

“I’m excited to work with her. She's one of the prettiest faces in showbiz,” Iñigo stated.

Meanwhile, Iñigo shared that he’s still seriously considering his options when it comes to establishing a showbiz career here in the Philippines.

Originally based in U.S., he previously passed an audition for a boy band in Nashville, Tennesee.

Asked if he still plans to pursue a music career in Hollywood, Iñigo replied, “I dont really know how to answer that right now.

At the same time, Iñigo maintained that finishing his studies is still part of his main goals.

“I was thinking of maybe taking a break or stopping at some point and then go to college and come back,” he added.