And the winners of Cinema One Originals 2019 are... 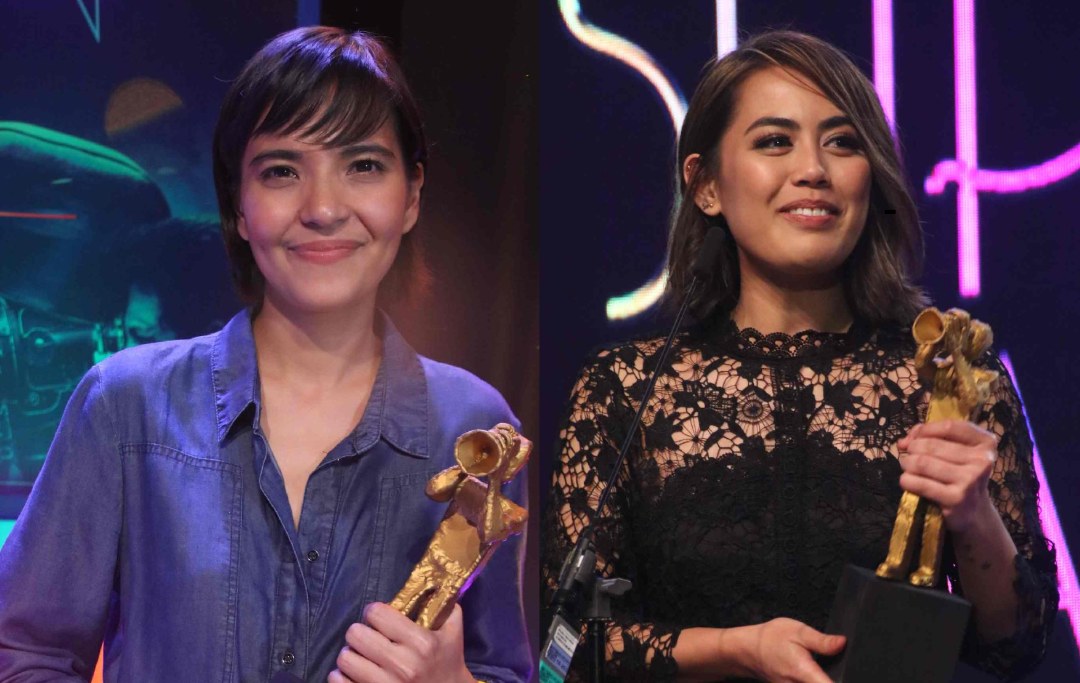 Alessandra de Rossi (left) and Iana Bernardez are among the winners of the Cinema One Originals film fest 2019.
PHOTO/S: Allan Sancon

Alessandra was cited for portraying a lucid dreamer in "Lucid" while Gold was cast as an intersex person in "Metamorphosis."

Gold portrayed an intersex person who has both male and female genitalia.

Best Picture “Sila Sila” marks Giancarlo's return to Cinema One Originals, since he had already placed first in the 2017 edition of the film fest for his sophomore film "Paki."

“I dedicate this award to the entire spectrum in the LGBT community. . . . Nandito kaming lahat ngayon nakatayo sa harap ninyo, baklang direktor, baklang manunulat, at baklang mga aktor [We’re all here standing in front of you—a gay director, a gay screenwriter, and gay actors]. We are seen,” said Giancarlo in his acceptance speech.

Aside from receiving the top award, “Sila Sila” also won Audience Choice and Best Screenplay for Daniel Saniana, while Topper Fabregas was named as Best Supporting Actor for his role in the contemporary flick that won a total of four recognition.

It also won Best Sound for Immanuel Verona and Vince Banta as well as the Best Cinematography award for Tey Clamor, who shared the recognition with “Tia Madre’s” Carlos Mauricio.

Tiglao, the director of "Metamorphosis," was teary eyed as he recalled his struggles while doing his film. His movie was initially given an X rating before it was reclassified as R-16.

Here is the list of winners of the 15th Cinema One Originals film fest:

Here are the official entries that competed in Cinema One Originals 2019:

1. Regine Velasquez-Alcasid made her movie comeback via Yours Truly, Shirley. Her character is a widow who believes a young popstar (Rayt Carreon) is the reincarnation of her deceased husband.

2. Victor Villanueva’s “Lucid,” written by Natts Jadaone, stars Alessandra de Rossi and JM de Guzman and centers its story on Ann, a luminous dreamer with her dreams the exact opposite of her mundane, routinary life. As she crosses paths with another lucid dreamer, she realizes her dreams are far more alive than her reality—making her question if it is worth staying there or not.

3. “Metamorphosis” is a coming-of-age story about Adam, a 14-year old kid who was born with a secret of having both male and female genitals. It stars Gold Azeron, Iana Bernardez, and Ivan Padilla and is directed by J.E. Tiglao.

5. Giancarlo Abrahan's “Sila-Sila,” a comedy about a boy who falls in and out of love with ‘the same people’ starring Topper Fabregas and Gio Gahol.

7. Eve Baswel’s horror entry “Tia Madre” is about 10-year-old Angel (Jana Agoncillo) who is living alone with her warm and loving mother (Cherie Gil), who unexpectedly became distant and violent towards her. Angel wonders, is she really her mother?

8. A crime comedy entry, Dustin Celestino’s “Utopia” stars Arron Villaflor, Enzo Pineda, and Joem Bascon. The film is about a videographer, a rookie police officer, and an undercover agent whose lives intertwine in the labyrinth of a violent city’s underbelly.

Cinema One Originals has been producing films with edgy, thought-provoking concepts such as “That Thing Called Tadhana,” “Baka Bukas,” “Yanggaw,” “Confessional,” “Changing Partners,” “2 Cool 2 be 4Gotten,” “Mamu; And a Mother too” and more.

It has been the discovery platform for new talents and the breeding ground for filmmakers such as Jerrold Tarog, Antoinette Jadaone, Richard Somes, Jason Paul Laxamana, and Dwein Baltazar—who all started in C1 Originals. Several of its previous entries have been highly acclaimed in not just local but also international award-giving bodies.