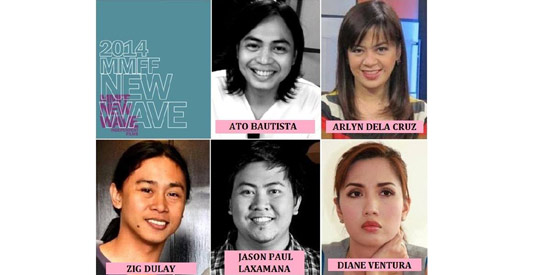 The directors of the full-length films of the Metro Manila Film Fest New Wave section are: (from upper left, clockwise) Ato Bautista for Gemini, Arlyn dela Cruz for Maratabat, Diane Ventura for Mulat, Jason Paul Laxamana for Magkakabaung and Zig Dulay for M. (Mother’s Maiden Name).
The Metropolitan Manila Development Authority (MMDA) announced that 15 of the 124 film entries have been chosen as finalists to the New Wave section of this year’s Metro Manila Film Festival (MMFF).
MMDA Chairman Francis Tolentino, concurrent head of the MMFF, said that the 15 New Wave finalists, five each from the Full Length, Student Short Films and Animation categories were adjudged as the most promising and though-provoking creations produced by independent filmmakers, aspiring student-filmmakers, and animators in the country.
“A common thread that binds these indie films is that there is the constant drive for excellence and improvement that will likely continue to draw audiences years after they will debut in cinemas this year. These stories touch on the most common of themes but are told in the most creative and intriguing of ways,” said Tolentino.
He also said that due to the overwhelming number of entries received this year, the MMFF screening committees (composed of leaders and shakers of the independent movie industry and the academe) had a hard time selecting the finalists.
"We are thankful for the continued support and hard work of our selection committees in choosing our finalists this year. I was informed that they had a hard time coming up with the shortlist because there were so many entries."
New Wave films complement the traditional mainstream films that are expected to log records in box-office attendance this Christmas.